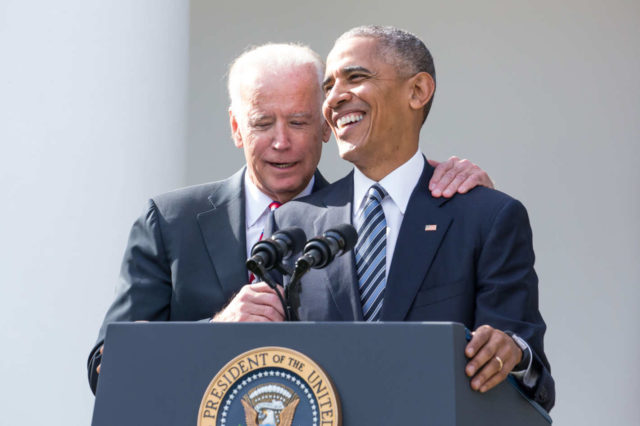 Earlier today I saw a Facebook post asking why President Obama is not coming out to defend his old friend, Joe Biden. Some dude wrote a comment saying that Democrats chew up their own and spit them out. I agree with the fact that Democrats definitely do screw (us) each other over for personal gain, I mean, look at what Hillary did to Bernie last time around. However, I don’t agree that this is what Obama is doing.

Just because he’s not coming to bat for Biden, it doesn’t mean he’s attacking him. It doesn’t mean he doesn’t support his friend privately, or that they haven’t spoken about it themselves. It’s very likely that even Joe himself told him to stay silent on the matter. Who knows for sure, but I’m sure they know what they are doing.

It’s worth noting that President Obama has not been involved with a lot of controversy, despite how hard the right wing has tried to hurt him, he’s stayed fairly clean. Of course there are things like “the fast and furious” story or immigration policies that could be brought up, but for the most part he’s stayed squeaky clean. It’s likely that they agreed that he not get involved. I don’t know? For all I know Obama can jump on the tv tonight and talk about it. But thus far, he’s left it alone and I’d say that’s the right thing to do.

All that being said, after two terms of clean presidency, and a fairly uneventful life post presidency, why would Obama get involved and potentially damage his legacy? The right wing would love nothing more than to somehow hurt Obama, and he’s not stupid and certainly not looking to create an opening for those people. The same can be said for Biden, he didn’t really have any major scandals during his Vice Presidency, and up until now, he didn’t have any problems since.

Can you blame either of them for being cautious? I sure as hell don’t. This is why I think President Obama isn’t defending Joe Biden. Mind you, I’m not speaking about whether or not Joe Biden was wrong, or if he’s guilty of sexual misconduct, or if anyone is lying at all. I’m speaking solely on why I believe Obama has remained out of it.