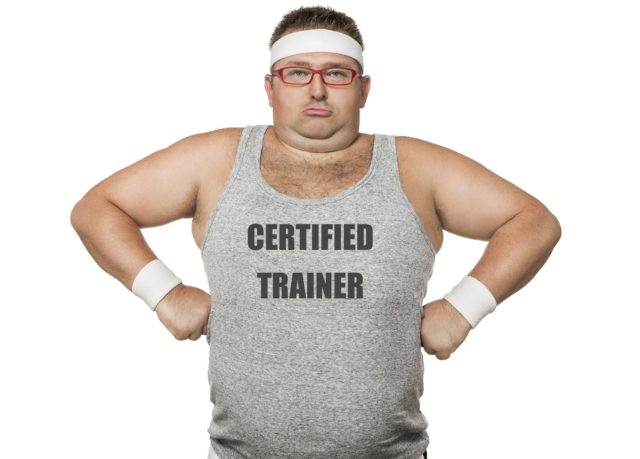 One of my friends just reached out to me complaining. He said he was looking into trying personal training sessions at a gym. He said that he was speaking with a manager about the plans when he noticed an obese looking guy walking by. He told me that the guy had large male breasts and his stomach was “leaking” out over his pants. He figured that the man was there for some personal training as well. He thought that the guy was there getting some help to get in shape, I mean, that’s what the gym is for. Cool beans!

As their conversation ended, that same obese guy entered the office, when he faced him, he noticed that his shirt said “Master Trainer” on it. My boy said that this very large man was going to be the one providing him with the trial session at a future date.

My buddy said he will not be going back to the PT department and asked me why a gym would employ a trainer that was so out of shape like that? He said that they lost a sale by not setting a good example. I couldn’t answer his question as I don’t know the guy, his health details, or that particular gym’s culture. I understand his point though, not everyone is going to be willing to give someone who looks out of shape a chance. Again, it is a gym after all, and you should be an example!

Some might argue that Cus D’amato wasn’t a super fit man, and he was able to coach one of the greatest boxing champions of all time. I agree with that, and I thought the same exact thing. But let’s face it, most of us are not Cus D’amato, are we?

Folks, if you are a fitness leader, please take pride in what you do! Live fitness if you are leading fitness. You don’t have to sport a perfect physique, but at least make an effort to make yourself look somewhat fit! I know this may sound harsh, but let’s be real, he did what most of us would do. Its human nature, so I’d propose that you stack the odds in your favor.