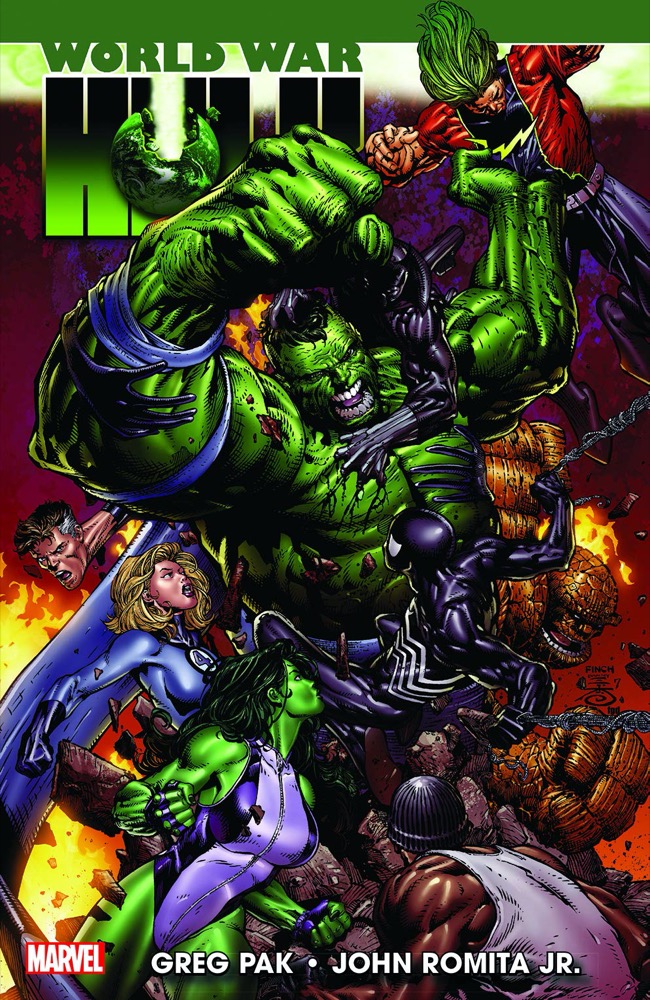 I read World War Hulk sometime ago and it was crazy. I’m actually halfway through reading it again. I never realized how freaking powerful the Hulk actually is. And to make things even crazier, he just gets stronger and stronger as he gets angrier and angrier. He’s always angry by the way. I’m reading the core comics this time, the first time I read all the addons and extras.

So this comic arc ties in directly with Planet Hulk and continues telling the story which follows the horrific events which occurred on Planet Hulk. You see, some senior members of the superhero community decided to send The Hulk off into an uninhabited planet filled with vegetation, because you know, he kind of continues to destroy everything.

Unfortunately for The Hulk, and those superheroes as well, something happens with his ship and he ends up on another planet, Sakaar. In this evil new planet The Hulk is enslaved and made to fight in an arena as a gladiator. The prisoners are stuck with obedience discs and made to comply with the Red King. A bunch of stuff happens, fighting, etc, and ultimately The Hulk and the other slaves win the war. He is then made the king of Sakaar due to fulfilling a prophecy. I don’t want to drop any major spoilers here, but that’s it in a nutshell.

While on Planet Hulk, he met a woman and fell in love. They even get pregnant and were going to have a child. But due to the actions of some individuals the planet is destroyed and everyone in it dies. The Hulk survives the destruction, but loses millions of people (including his love) as his ship explodes and the planet dies. In his rage, the Hulk blames earth’s superheroes for the death of his subjects, his love and his unborn child. This leads to the Hulk coming back to earth and unleashing all his rage against those who he blames.

The main comic is five issues long but somehow I got my hands on a whole bunch of other side stories that were in this Saga. It took me a very long time to work my way through the entire story and I eventually realized that I could’ve just read those five comics to get the core of the story. Those 5 are the ones I’m currently rereading. But all those other side stories or whatever the hell you call them were quite entertaining as well. But yeah, it took me a very long time to get through all of them and to get to the main arc of the story. I’m new to comics, so I thought you had to read it all.

During World War Hulk we once again learn how freaking powerful this guy is. Everyone tries to stop him, from The Avengers, to the X-Men, to the Inhumans, the army (and many more) and they all tragically fail. There is so much destruction and havoc as The Hulk goes on an uninhibited rampage. Though I do give him props for giving the civilians a chance to evacuate the city before he goes to work.

If you are a fan of The Hulk, you owe it to yourself to read this story. It is intense, entertaining and really gives you an appreciation for the powerhouse that is The Incredible Hulk.