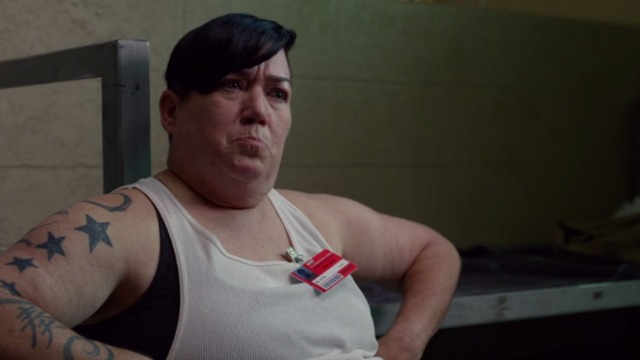 Sometime ago, I was involved in a heated debate with someone about gay rights. The person could not win against my logic, or intelligent reasoning. So they did the only thing they could do, and tried to turn to personal attacks. One of the statements that they made in an attempt to hurt me was that I looked like an overweight lesbian. They used Boo, from Orange is the new black as an example of the type of butch I looked like. They even questioned whether or not I was a real man. The thing is, I’m a fan of Boo’s. She’s actually one of my favorite characters on the show, and after seeing her stand up for lgbt rights on the train, in real life too!

When I laughed at the attempted insult, the person became confused and disoriented. They didn’t expect my reply to be “Oh, I love Boo, she’s so freaking awesome. Did you see her going in on that guy in the subway?” Also, I can actually see the resemblance between me and Boo, and I think it was pretty clever and awesome to say I resemble her. No offense taken here! I will say this though, as an adult I can process this, and find the humor in it. However, when I was a kid, being bullied and attacked by the “cool” kids wasn’t fun. Especially in the South Bronx where it usually included some heavy violence mixed with the words.

My point is, please encourage tolerance, acceptance, and love in your children. I may take no offense to this type of “attack,” but a young insecure kid may react differently. They do not have the life experience and understanding that us mature older folks do. So please teach your children right, they’ll thank you later.

Case in point, what do you think Boo would have done to this guy if he tried to hurt her in some similar fashion? 😉