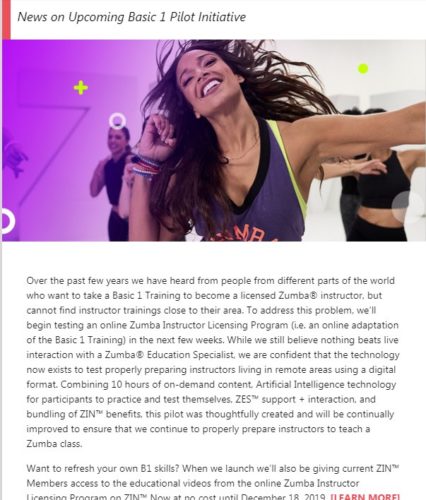 So Zumba sent out a newsletter stating that they are looking to license people to teach Basic 1 via online training. Some people are okay with this and others are complaining about it.

If you read my first article on getting a Zumba license, you might be able to figure out my stance on this quite easily. One of the sticking points from naysayers is that there won’t be interactive instruction or supervising. I think that’s bull crap.

Here’s why I think that, the only thing you have to do to get a Zumba license is show up to training. That’s it, that’s all you have to do. There is a master class, a break, the instructor goes over a few rhythms, has you play with some choreo, goes over some written material, then at the end, if you sign up for the recurring ZIN fees you are a licensed Zumba instructor. There is no testing, no real knowledge checks, it’s not pass or fail. It’s show up, pay, you are in. Pay to play at its finest.

The only real test is when you audition for a job at a gym. When you do that, the group exercise manager evaluates you and depending on their personal preference, they decide if you are good enough. I’ve seen some horrible instructors in my time at many gyms throughout the city, so this area is extremely subjective.

After that, the only other check is how well you actually perform in class, and that too is subjective. For example, on Saturday at one gym, they adore me and I get 70 to 90 people every week. At another gym, when the instructor left and I took over on Saturdays, I had about 15 people left in the class. The larger group never even gave me a chance, they just didn’t show up. Count the difference between 15 to 90 people, that’s quite a huge gap. So yes, this too is subjective and many variables come into play. However, real talk, some people just suck.

In my opinion though, from Zumba’s end there is no quality control when it comes to becoming a Zumba instructor. I mean, all you have to do is take a few classes with different instructors to see that. Frankly, some of them suck. Yes, I know, spread love and positivity, and everyone is equal in the Zumba world. But really? Are we all equal? I don’t think so, and I’m not going to pretend that’s the case to win brownie points with whoever the hell is keeping track.

In addition, I’ve seen and experienced plenty of hate and negativity in the Zumba world. You can sell whatever b.s you want, but the reality is that there are plenty of big egos in Zumba, and yes some people suck, and yes some people are assholes. Of course, there are also plenty of loving and wonderful souls in the Zumba world. Like I said, it’s my favorite format to teach and the students are great! But let’s not act like its all perfect, I hate that fake crap. Be real.

The Zumba community is just like any other community, it has its good and bad. To pretend otherwise is to insult the intelligence of the community and general public. I don’t play that crap. I’ve had people unfriend because students said they liked my class after I subbed. I didn’t do or say anything, I just covered the class, then the person became my “enemy” because they thought I was trying to hurt them. I’ve had people lie about me to try and get me removed as an instructor because they didn’t like my style for some reason. I’ve seen students walk out while cursing because a certain instructor showed up. I’ve seen instructors speak badly about others. And on and on it goes. The point is, don’t pretend this bad shit doesn’t exist, it does.

Anyway, I digress. Look, this move by Zumba is about making money. They want more people to sign up and pay for training. Whether they teach or not, if they want to be ZIN, they have to pay those monthly fees to Zumba. Why would they not open it up and make it more accessible to people via the web? From a financial standpoint, it makes amazing sense and it is a great move. We already know that there is no real quality control even in the in person training, so what difference does it make?

Want to know what makes a good zumba instructor? The instructor themselves. They have to practice their choreo, embed the cues into their work, put together a great playlist, bring the energy and give the students a great class. You don’t need to take Zumba training to do any of those things, we know it, they know it, and its just about the brand and making money. Most people are scared to say this because they don’t want to look bad, but I ain’t worried about that.

I teach Zumba and I love teaching it. It is my favorite format to teach hands down. I’m really good at it and my people love my classes. I wear Zumba clothing, and I am a fan. But don’t let that fool you into believing that I am some brainwashed Zumba robot, I’m not. I know and understand the company and their financial model. Like I said, I love to teach Zumba, and I love the groups I teach for, but I also know that they want that money. So, as I stated before, from a making money point of view, this is a genius move and I praise whoever came up with the idea. It is genius!