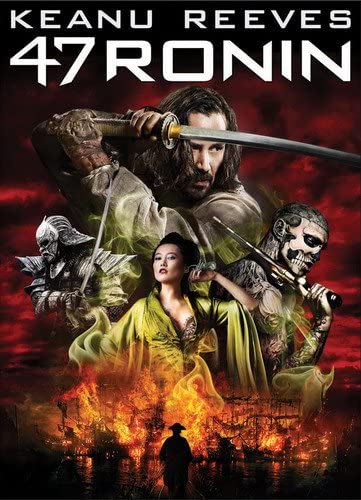 This movie was really good. 47 Ronin stars Keanu Reeves but it doesn’t revolve entirely around him. He is clearly one of the main characters but I was pleasantly surprised to see that the whole story didn’t revolve around his character. Nothing against Reeves, he is an upstanding gentlemen and one of my favorites for sure. But a film should certainly be focused on it’s namesake, no?

Throughout this film there is a lot of troubling treachery and it really bothered me. I don’t want to drop any spoilers, but it really irks me that the bad people here get away with and frankly benefit from their horrible actions. Now because of the way things worked back then, with honor and all that, when the victims of said treachery try to make those things right, as a reward for doing the “right thing,” they are told that they get to die with honor instead of like common criminals.

Now call me crazy, but dead is dead. WTF? The man and women who love each other here can’t even be together because of this treachery, I mean, come on. “I’ll see you in the next 1,000 lives?” Screw that man, go and disappear with your lady now, in this life!

I don’t feel that they should have died and the wrong doers should’ve been punished right from the start. The 47 Ronin, who were in fact the victims here, should’ve been forgiven for what they had to do. It just bugs me that in this world, forgiveness leads to the same end result, death. That just doesn’t sit very well with me.

I know it’s a cultural thing and honor among samurai was huge. The Emperor’s words were law, but he was wrong here. They had no choice but to disobey him in order to protect their honor and do what was right. The Emperor himself said, “I see only Samurai here,” acknowledging his respect. Despite doing what was “right,” disobeying him meant death. I just feel like these 47 Ronin just couldn’t catch a freaking break no matter what they did. Damned if you do and damned if you don’t.

I was surprised that I had never seen this film before. It is really good and comes highly recommended.