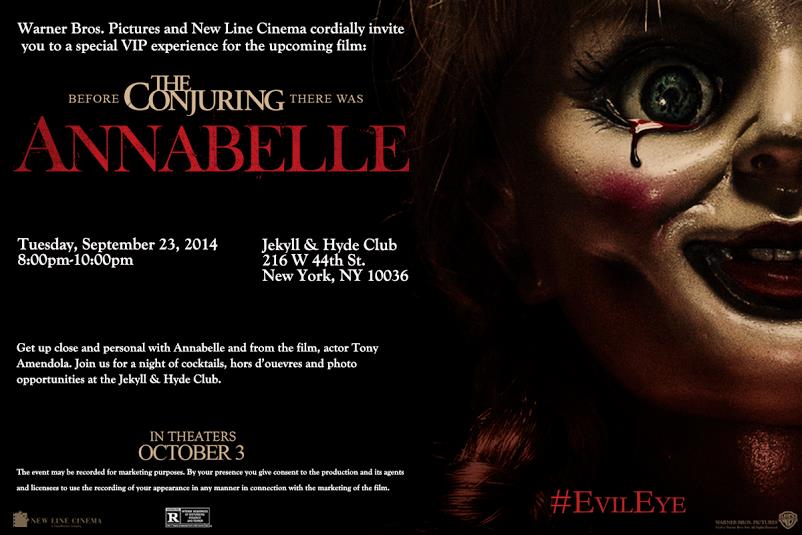 Tonight I had the pleasure of attending the release party for the upcoming horror film Annabelle. The event was held at the awesome Jekyll and Hyde in Times Square. The invitation to the event came from my man Urban Jibaro. When on my way there, I had no idea what to expect, but once I settled in, it all fell into place. Allow me to tell you about some of the interesting moments. The first person I encountered when entering the pathway towards the event was Iman Crosson, better known online as Alphacat. That was pretty damn funny to me, and absolutely unexpected. I recognized his face, before I remembered his name, it took me a second to place it. I introduced myself and kept it moving. Later in the evening, we took this picture at the bar. It was pretty hilarious to see this guy here, totally the last person I would have ever expected to meet at an event in NYC. My son would have loved this, because Alphacat has made vines with Liane V, and my son loves her! So by default, he loves Alphatcat. I’m feeling Liane V too, but I can’t write too much about that, know what I’m saying? Next, a gentleman I have never met started filming me coming out of a bookshelf hidden bathroom. I saw the camera, and I went all hosts like on the guy. “This here appears like a regular bookshelf, but there’s more to it.” Haha, he loved what I was doing, so he followed me around with the bright camera for a little while filming my interactions. Pretty good stuff. I ran into Edwin Vazquez while he was filming me, and I had him introduce himself for the viewers. Once again, pretty nutty stuff. Here is Edwin with Annabelle actor Tony Amendola. I was supposed to have an interview with this gentleman, but we didn’t get around to it this time. Perhaps another day, There were a few opening speeches about Annabelle and the film’s upcoming release. Tony Amendola spoke about the film and his experience. Here is a crappy picture I tried to get while he spoke. I suck at pictures, clearly pictures are not my strong point. However, we have some nice professional ones possibly coming. Here is a picture of the scary Annabelle. There were folks with some pretty fancy cameras that took pictures, and I’ll share those as they become available. I’ll share the video that I semi-hosted of the event when it is available. My wife is a big fan of scary ghost like films. I am certain that this is right up her alley, and we’ll be sure to watch it. Here is a picture of my friend Nessa. She gave us the bracelets pictured below that would protect us from Annabelle There was an open bar during the evening, though anyone who knows me knows that open bars are wasted on someone like me. I don’t drink often, and definitely not when I have to work the next day. Although I did partake of their finest ginger ale. My man Papo Swiggity, and several other capicu folks drank my share of beers for me. Lol. In between me and Papo below is Ms. Flaco Coquito, who by the way is the one who took all these nicer pictures! This event was pretty awesome. I met some new people, saw some old friends, and got to mingle with some folks that are behind the Annabelle film. I look forward to seeing it. It’s kind of cool to hang out with someone like Tony Amendola and then get to watch him on the big screen.

At one point, they killed all the lights, except for the one on Annabelle, that was creepy. I tell you, they couldn’t have picked a better venue for this event than Jekyll and Hyde. It just lends itself perfectly to this type of event. Urban Jibaro knocked it out of the ball park. Everyone enjoyed the entertainment, the company, the venue, the finger foods,and the drinks. There was all kinds of winning happening here tonight. As a final treat, I decided to see a Santero at the event. He strongly believes that I will find great success in media and television. Hey, I’m not a hugely superstitious person, but I’ll take it. Thank you Salvador Gata, for the nice reading! Check him out if you’d like to do a reading of sorts. Annabelle will be in theatres October 3rd, 2014! Make sure you check it out! I think it is actually based upon real events. Get your girlfriend, or wife, or sister, or friends and scare the crap out of them. Lol. Big shout out to Urban Jibaro for the invite, and for putting me on to the #annabelle film! Do you think these guys below know that Grover is right behind them? Edwin, Mia, Boricua Goddess, and in the rear James Grover. Follow the hashtag #evileye to keep up with the haps! Nicer photos courtesy of our friends at Flaco Coquito, and Katie Kay Photography. All the crappy ones were me. But see, I knew that nice pictures were coming. Photography is not my thing, yo!

I just fast forwarded through that creepy commercal lol

I can’t wait so excited