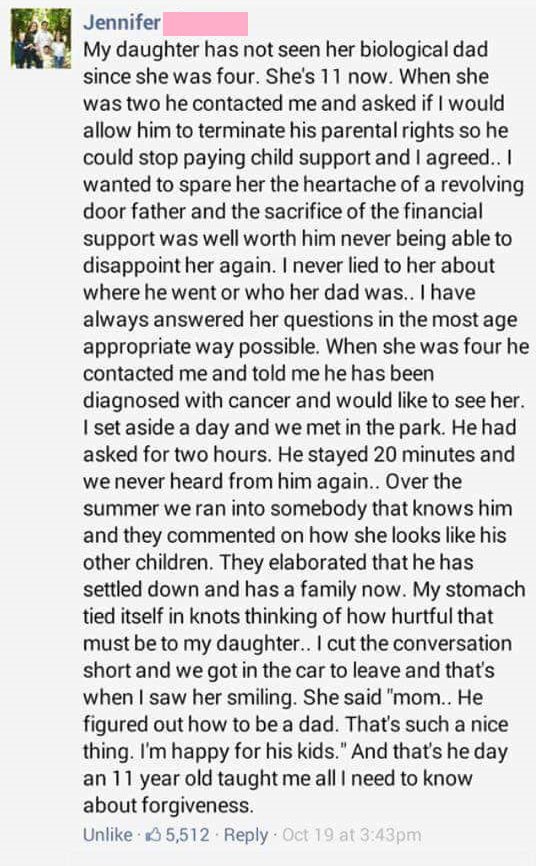 Sometimes life throws us curve balls and things don’t go as they are supposed to. I’m sure that you have experienced this, just as I have. Perhaps you studied all night for that test, yet you didn’t pass? Maybe you finally worked up the courage to talk to that crush, and they turned you down? Maybe that train made you late for that amazing job interview, costing you that much-coveted job? These are just regular life occurrences, and they happen to all of us. We have no choice but to suck it up, and carry on with our days. However, what happens when a person who shouldn’t, terribly wrongs you?

Such was the case with the young lady in this story. Her father abandoned her at a very young age, leaving her mother to do all the work in raising her. The father made the odd appearance here and there while she was very young, then disappeared again. This man (and I use the term loosely) didn’t even have the common decency of providing financially for his offspring. He requested to give up his parental responsibility to avoid child support, and the mother agreed. This is a common occurrence in today’s world, but the way this child handled it, definitely is not.

As I write about this story, I feel my blood boil. I am filled with anger and rage. Few things can get me going like a deadbeat father. However, the little girl (only 11 years old at this point) handled it very differently. After a chance encounter with a mutual friend, the mother learned that the dad had settled down and started to raise a family. She reacted much like I have. However, on the way home, her daughter surprised her. Instead of being angry or hurt, the little girl smiled and stated, “He finally learned how to be a dad.” The mother states that she learned all she needed to about forgiveness at that point.

I decided to write this article because the innocence of this child amazed me. Unlike her, I am not this forgiving. As an adult, and a father, I know all that goes into raising a young child today. Yet, who am I to be angry at him? If the main victim of his transgression is not seething, and even her mother (who was also a victim of his abandonment) could let it go, then who am I to be angry for them? This story showed me that I have a lot to learn about forgiveness. I hope that some of you out there, who are like me, can also learn to forgive, or at least acknowledge that you have much more room for personal growth. I know that I do!