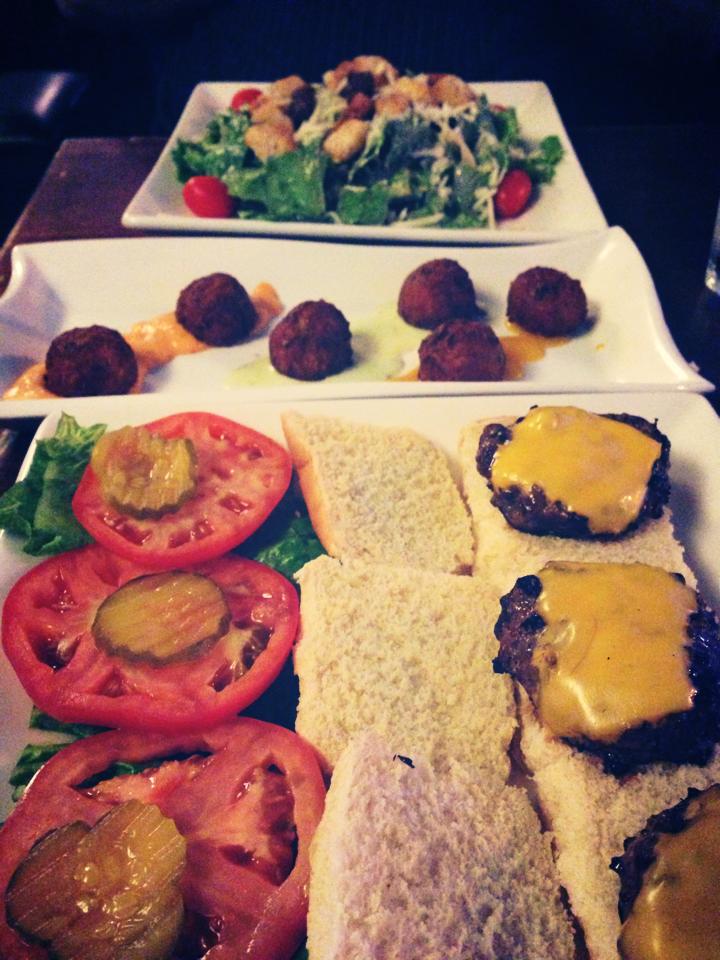 Last night me and my wife went on one of our dinner dates. We have been wanting to try out this restaurant in Forest Hills for sometime now but never got around to it. We decided to give it a go last night. I have to say, I’m glad we finally checked it out, you’ll notice that I gave the place five stars, I don’t often do that but everything here was right on point. I don’t have a single item that I didn’t like! That’s saying a lot because I am one critical SOB!

Let’s start with a fun perk, when my wife checked in on Yelp she was presented with a coupon for a free glass of wine. Foursquare didn’t give me crap on this by the way. Anyway neither of us drinks wine often so we asked if we could apply this coupon towards a ginger ale. Seems like a win win for everybody, as expected they were ok with that. YES! SCORE! LOL…

There were several items that caught my attention on the appetizers list, kobe sliders, mini crab cakes, and of course the caesar salad. For years I  have joked around that I am a caesar salad critic, well I actually really am now aren’t I? The burgers were absolutely delicious. There is nothing tastier than a smoked burger, when you can taste the charring sort of. Ugh, I can’t really describe what that taste is, but there is a special taste to it that I simply love. When I bit into this burger and got that charred taste in my mouth.. Ohhhh. That was good…. That makes me a very happy Angel! My wife nodded in agreement as she tasted hers as well.

The crab cakes come sitting on top of 3 sauces. The first is sort of like a sweet orangy tasting sauce, sort of like the one you get with sweet and sour chicken at the chinese spot in the hood. You know what I’m saying right? Well, you rich guys probably won’t, but anyone that grew up in the ghetto like I did knows what I’m talking about. It’s like a lighter, fancier version of that. It’s pretty good. The next sauce is a cool wasabe based sauce, this one was my favorite of the 3, and my wife also agrees on that matter. The last one I think is more mayonnaise based, I didn’t dislike this one, but if I never had it again I wouldn’t miss it. The crab cakes themselves were delicious. Just the right level of crunch and softness. They tasted fresh and didn’t have the fishy aftertaste that so many crab cakes tend to have. Yum!

The caesar salad was spot on. Taste was perfect, level of dressing and cheese was perfect and the croutons were crunchy not soggy and gross as often happens on a caesar salad. This wasn’t my favorite caesar salad, that title is still with Royal Carribean cruises, but it was definitely a good one.

I decided to have a go at the NY Cheese steak, and my wife went with the fish and chips. Across the street from this restaurant there is a place called “Ripe“, a restaurant geared towards fitness buffs and health food. The owner of Exo Cafe, Peter, also happens to own Ripe. This was clearly evident to me when I bit into the NY Cheese steak. I know all too well the steak and beef based dishes from Ripe, and this steak tasted exactly the same. This is a different twist, but clearly the chef is either the same, or they share tips. On the way out I spoke with Peter and his lovely friend and he smiled when I told him I could taste the similarities. Well, for those of you wondering, I liked it. I’m a fan of Ripe and I eat there very often. The fact it tasted similar is not a bad thing here, it’s a good thing because I know it’s a relatively healthy version of a cheesesteak. Peter said “I eat here too you know, so the food has to be something that I like as well.”

My wife had the fish and chips, I tasted it. This has to be the best fish and chips I have ever tried in my life. I for one am not a fan of fish and chips, I’ve had it BY THE WATER IN AUSTRALIA and I still wasn’t impressed. It’s just not something that I like. However, their version was pretty good. The fish was delicious, the breading was just right and it was seasoned to perfection, and it didn’t taste FISHY! The fries (which I also had on my dish) were pretty damn good too. At this place, the fish and chips is actually something that I would eat. Peter should be proud of that, because I wouldn’t say that about any other place where I have eaten fish and chips.

By the way, just because I have mentioned that I spoke with the owner, that has nothing to do with these guys getting a good review. We are not BFF’s, and I only greeted him on the way out as we had once corresponded over email. I wrote to his company’s email address complaining about the fact that their website was misleading on delivery and that I was pissed off about that. I get moody when I’m hungry. LOL. He handled it well and I realized I was being a douche bag. Haha. I just want to put that out there, this visit wasn’t an invitation from the owner, this was a  place we wanted to try. And even if it was an invitation, I’d still give an honest review. This man cannot be bought! If you are good, I’ll say so. If you suck, then you suck and I’ll say so.

The service here was great, our server was friendly, the food came out relatively quickly, and the place is clean and very sleek looking. The prices are also quite reasonable, our plates came out to about $67 prior to tips and everything. It is quite a nice place, I’ll definitely return here again.

Their brunch is really solid too.

Check out this amazing note that I received from the owner of Ripe and Exo Cafe. This is what it’s all about! Touching spirits, motivations, and creating happiness! Hey Angel, I read the article. WOW. To say the review was the nicest, most well written, warmest, sincere, and “real-est” review I have EVER read about ANY restaurant, would be an UNDERSTATEMENT. I read it twice and then I shared it with my staff. They too wanted me to read it again and I will read it to all on our next monthly meeting in a few weeks. Words cannot describe… Read more »

Check out this amazing note that I received from the owner of Ripe and Exo Cafe. This is what it’s all about! Touching spirits, motivations, and creating happiness! Hey Angel, I read the article. WOW. To say the review was the nicest, most well written, warmest, sincere, and “real-est” review I have EVER read about ANY restaurant, would be an UNDERSTATEMENT. I read it twice and then I shared it with my staff. They too wanted me to read it again and I will read it to all on our next monthly meeting in a few weeks. Words cannot describe… Read more »

[…] WOW. To say the review was the nicest, most well written, warmest, sincere, and “real-est” review I have EVER read about ANY restaurant, would be an […]

[…] WOW. To say the review was the nicest, most well written, warmest, sincere, and “real-est” review I have EVER read about ANY restaurant, would be an […]