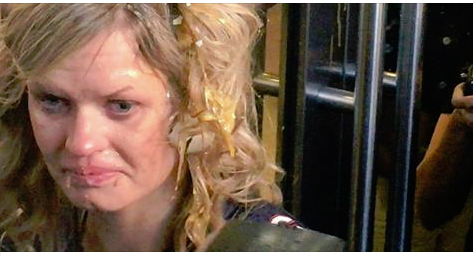 When Trump supporters attacked anti Trump supporters, I spoke out on behalf of the victims. No one should get punched, kicked, or bullied because of their political views.

The same works the other way around though. Just because you are against a guy that many of us do not like, does not give you the right to attack one of his supporters this way. There was so much wrong in this video.

Throwing eggs and other crap at her. Putting the Mexican flag pretty much in her face. This is unacceptable, and I do not support or condone this type of behavior in any way, shape, or form.

This is unacceptable behavior from both sides, and when either one does it, they need to be condemned for it!

[…] A couple of days ago I came on this very website to condemn a verbal and somewhat physical assault against a Trump supporter, by Latino anti-Trump protesters. They threw eggs at her, scream at her, spit at her, and continually flashed a Mexican flag in her face. This was not cool, and I condemned it. […]