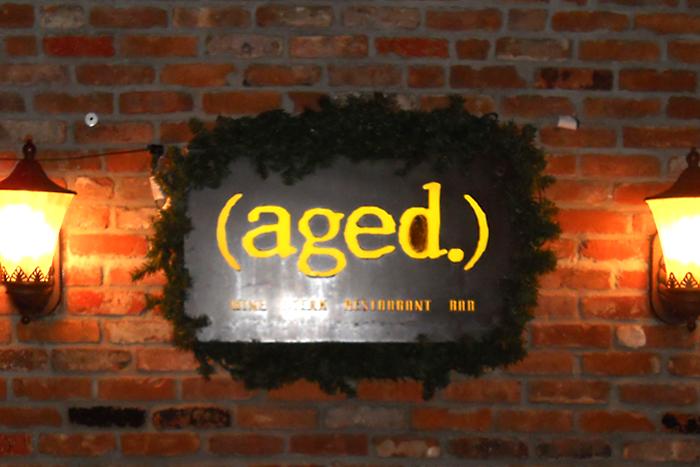 I’m on a mission to try out all the places at the neighborhoods that I often visit. For years, I have eaten the same thing, day in and day out. Then it occurred to me, as a restaurant critic, I should be familiar with everything in my area. With that said, I’ve been hitting all the places in the Wall Street and Forest Hills area.

Last night, I decided to get off the train at Continental Ave, in Forest Hills. I walked on Austin Street and examined the restaurant lined strip. I noticed this spot, Aged, since I had not being here, I decided to give it a try. Yes, I have no problem eating by myself.

Upon examining the menu outside, I realized that this place is a bit expensive. It looks like I have a pricey meal ahead of me. To match the price tag, this place has a nice, high end feel to it. The staff is attentive and very professional. They have guest seating inside and outside. I sat inside as it was a little rainy.

This is a steakhouse, so of course I had to try out the steak. I saw that they also happened to have crab cakes and Caesar salad, so those two items made up the remainder of my meal.

Once seated, I was at a wobbly table, so I switched seats, they were cool and accommodating about it. I was started off with some bread. Three different types, I’d be much more talented if I could name all three, but I cannot. I can say that two out of the three were soft enough to butter and eat, the third piece was too hard for my taste. The salad and crab cakes came at the same time. By itself, the crab cake tasted slightly bland. When I added the little pieces of cut up tomatoes, and the sauce, it was much better. In this case, the elements together made the dish much more complete and tasty, by itself the crab cake would have been an epic fail. There is also a small seaweed salad that comes with this dish, that was pretty good. The Caesar salad was acceptable. Not my favorite, but far from the worst. In terms of my “salad critic career,” this was more towards a good salad. The ingredients were fresh. The croutons were crunchy. The cheese was good, the only part that seemed lacking to me, was the dressing. I can’t exactly point it out. I feel like there may have been a bit too much of the anchovies flavor, and not enough of the other components. I went with the hangar steak, medium. One thing I will say, they get the cook on the steak right. My steak was still red, and some of the blood made its way on to my plate, not in a gross way, but in a “It’s medium” type of way. I think back over all of my years eating steak, and the many times I made them char up many a good cut of steak. Ah, how we grow and things change. I wonder whether a day will come when I don’t despise Greek yogurt and that nauseating smell? This dish comes with mashed potatoes and some spaghetti vegetables. The mashed was very good. I enjoyed them. Same goes for the veggies, they were pretty tasty. The steak, on the other hand, I don’t know. This could have been better. After eating so much steak, there is a certain standard that I hold my meat to. Uhm, yeah, that doesn’t sound too good, does it. Ha ha. I don’t know what it is, but I’ve become quite fond of a tender steak, one that my knife can cut through like butter, that melts in my mouth. Then there is this certain flavor that I look for. I can’t quite describe it, but if you go to Ramen.co and try the Ramen burger, that’s the taste I’m talking about. This steak had a neutral flavor profile. It didn’t wow me, but it wasn’t bad. Unlike the crab cake, the sauce didn’t save this one though.

Maybe I’m spoiled, or jaded due to eating meals cooked by celebrity chefs on tv, but I expected more. Especially when eating at a place where one is paying $14 for a crab cake. Though I have paid more in other high end places, this one is definitely not cheap. The place was not a total bust. I could potentially see myself coming here and trying the place another time, if my friends, wife, or a guest wants to try it, even after my discouraging it. However, the likelihood of me going once more on my own is not very high.