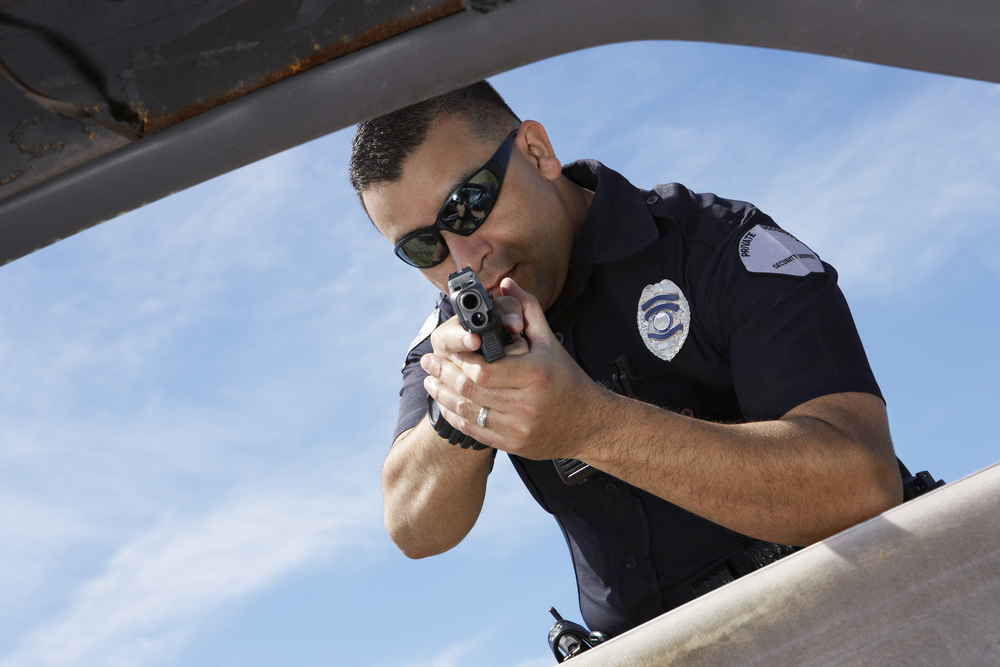 I was taught that if I ever have an encounter with a police officer while in possession of my firearm, that I should announce that I have it. My hands should be clear and visible, my energy should be calm, and I should let them know that I have a legal concealed firearm permit as per my second amendment right. If they ask for my permit or I.D, I should announce that it is in my back pocket, and ask for permission to reach for it. I should then move slowly, and calmly as I retrieve it. Even better, I should invite the officer to get it while I keep my hands visible the entire time. That’s the process, unless you are this guy in the picture below that is. Then none of what I said applies.

By the way, I’m not entirely sure what is happening in this picture, but what I can say is that I don’t see a clear and present threat to his safety, yet, I see this man with his hand on the gun, an officer present, and he’s still alive. Just saying. Does the aforementioned process sound familiar to you? It should, because as I understand it, this is mostly what Philando Castile did during his encounter with law enforcement. He announced that he had a weapon, and as directed, he reached for his I.D. So why is he dead? Why is it that a white person, in these same gun culture states is treated as a “gun guy,” but a black man is treated as a criminal and shot dead?

What does the NRA have to say about Philando being killed in this fashion? Have they released a statement about this horrible shooting? Is Philando dead because he exercised his second amendment right? Would they have killed him anyway? Why is this young man dead?

Look at this old clip of a man brandishing a weapon, making threats, and driving off into the sunset. Also, still alive.

What is one to do when the cop is the criminal and the killer? Does the second amendment not allow us to defend our lives? Does the uniform make you immune to our second amendment right, and our right to live? We can’t kill you, even if you are trying to kill us in an unjustified manner, if you are in uniform?

Listen to this old interview with Brenda Cortez, who was pulled over for talking on her phone. Mind you, the officer pulled her over, with a gun drawn, for talking on the phone!

At the end of the day, based on the facts that I have at this moment, Philando Castile did nothing wrong, but he’s dead. The question then becomes why? Why is he dead? Is it because he had a gun, and if so, why? He was legally allowed to have this gun, and he even announced it. Is it because he was black with a gun? Seriously, why is this man dead?

What’s it going to take for this to stop? All you good, experienced cops out there, please, get these others under control, and get rid of the bad ones. If you do not, you are going to pay the price for their actions. You are making it harder and harder to defend you.

Innocent black and brown civilians are dying every day, it seems only logical that one day the community will get fed up and retaliate. It’s up to you to stop this before it gets to that point. If the cop was wrong, you should be pushing to punish them. I know that you good guys will agree that they are not all innocent and justified shootings. Do the right things by us, so that we can continue doing the right things by you. Otherwise, I fear things will get worse before they get better. Step up and fix the system, or we will all be paying the price.

This last video shows the difference in how officers handle a black man who is open carrying a rifle, and a white man. The first officer, is one of the most professional I have ever seen, and though I don’t think this is a great test, (a good test would be the same officer for both men) it still illustrates the point of how the two shades are treated differently in society. Though, I would be willing to bet the first officer would have been just as professional with the black man.

[…] They might not be shooting him dead in the street, but they are most definitely endangering this man’s life. They don’t care though, just another black guy who might get hurt, right? This one was carrying a gun, and we can’t have that! Who told him that the second amendment applies to him? […]