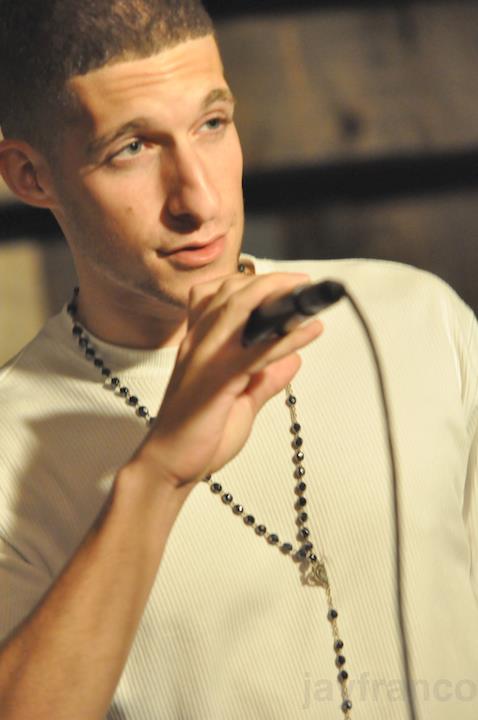 I have been away from the poetry scene for sometime.  Recording my music, working, family responsibilities and even working on this site have kept me from attending and performing for many weeks at a time.  I finally made it back last week, and I kept hearing this name in passing, “Charlie Scott”.  People kept saying “he’s such a great rapper, amazing lyricist, and singing his praises.  I wondered, who is this dude and where did he come from? How have I not heard his work yet? I’m a regular…  Seems like a new guy, I’ve never seen or heard of him at the Inspired Word or any of the other shows.

That is until last week.

How does one explain this?  Well, I was floored! I immediately found out who Charlie Scott was.  He performed “Dear Roxy“, a letter that his therapist requested he write to “Roxies” as he kicked the habit.  A heartfelt performance, amazing lyrical flow, and a recognizable beat make this song an instant hit among the audiences that hear it.  A quick Youtube search, a few songs later and I was in love.  This man is extremely talented and you have to hear his work.

Mind you, I just literally met him last week, I gain nothing from doing this, but, when you discover something so great, it’s like winning the lottery, it has to be shared. You need to give this dude a listen. Trust me. One of the things I really like about him is that he is telling a story, his music has substance, it’s “real talk”. Trust me!

Well, it’s obvious that I was extremely impressed with this man, I immediately reached out to him on Facebook when I arrived home. I sent him a “friend request” and after sometime talking I  offered him a spot on my “Power Struggle” mix tape (2013).  He accepted and I am super excited to see the finished product. Charlie listened to all of my tracks and he agreed to write a verse for “You inspire me“, a soft song I wrote about inspiration which includes amazing vocalists Kathryn F Hoxie, King I’wante and myself. Stay tuned for that super duper hit!

In the meantime head over to Charlie Scott’s youtube channel and check out his music. He recently released the “Bipolar Mixtape”, hit him on facebook for where he will be performing so that you can pick it up.

I love this write up about Charlie Scott. I had a chance to see him perform live and his stories are so powerful. God bless you Angel for introducing the world to his next big phenomenon.

[…] I hear Asha’s sultry, soothing voice.  I recently had the honor of working with Asha and Charlie Scott on a song called “Walking Along“. “Walking Along” is a piece I wrote to a […]

[…] everyone. Poetry, Comedy, Hiphop, Pop, and who knows what else! Furthermore if you have not seen Charlie Scott perform, I would advise you to come and check this event out. This is certain to be one of the few […]

[…] was my first impression of Charlie Scott. A lot has happened since this post originally appeared on NYCTalking.com. Stay tuned, Charlie Scott has some really exciting things coming […]

[…] my first impression of Charlie Scott. A lot has happened since this post originally appeared on NYCTalking.com. Stay tuned, Charlie Scott has some really exciting things coming […]

[…] if you have not seen Charlie Scott perform, I would advise you to come and check this event out. This is certain to be one of the few […]