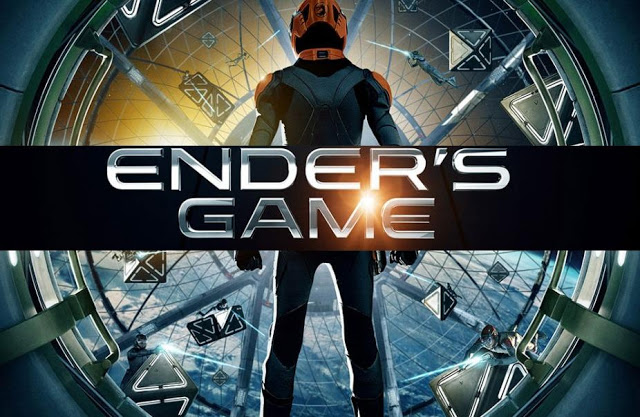 So last night I was finally able to watch Ender’s game. This film was phenomenal, much better than I expected. I didn’t realize that it was a book series, otherwise I would have opted to read the books first. I find it is awesome to read the book then watch the film. The other way doesn’t work very well for me, although that is how it did happen with the Harry Potter series. I saw the first few films after years of resisting the brand, and then I picked up the entire book series to know the rest of the story. In case you didn’t know, this came to be one of my favorite book series.

So about Ender’s game, initially I thought it would be a film geared towards kids. That’s part of the reason I hadn’t watched it yet, but I was wrong on that assumption. The only thing that this film has that is “kid like” is that the heroes are young kids. However, you could replace any or all of those kids with grown men and women, and it wouldn’t affect the flow of the film at all. That was a welcomed treat as I wasn’t sure if the film could hold my interest. For instance, we tried to watch the film “Turbo” this weekend, and all of us got bored on that one. Even my son lost interest. It was ironically slow and dull. This is a sci-fi thriller where the kids are basically training to fight a war against aliens, in this video game like form. Somehow the higher ups decide that Ender is the one to lead this war, and things progress from there.

Ender is this extremely intelligent, strategic thinker. In real life, and everyday tasks, he thinks about strategy. In the beginning of the film, he’s getting picked on by some bigger kids who think he washed out of the training program because he had a neck monitor removed. He then proceeds to beat the crap out of the kid. When the kid is down, he tells him “stay down.” The kid doesn’t listen, and he tries to get up, so Ender beats him more, after that kicks him in the stomach several times. He then warns the kid’s friends, “You might want to gang up on me, but you see what I do to people that try to hurt me.” They leave him alone after that moment.

Later in the film we observe the military higher ups discussing Enders strategy in that fight. Visiting his home, Colonel Hyrum Graff asked Ender, “Why did you kick him after he was down?” Ender said that “Dropping him won the first fight, however, kicking him more and more won and prevented any future fights.” His view is that instead of waiting for the bully to come back, he made it so that none of them would ever bully him again. One fight that would end all fights. This would be the logic that the Colonel would use to justify attacking the alien planet unprovoked. “This is a war to end all wars.”

This is where I get confused, plenty of things happen throughout the film to lead-up to this confusing point. Ender goes through training, quits, comes back, makes a few friends, makes some enemies, and all the usual fun stuff. You’ll have to watch it for all the little details. However, towards the end of the film, Ender gets tricked into thinking he’s still qualifying on a simulator, yet it’s the real war. This kid basically annihilates the entire alien planet, once he realizes what he has done he becomes furious. He’s angry because the Colonel tricked him into committing genocide. Of course, the Colonel believes that he has saved the entire human race, and did what he had to do.

While he’s knocked out, due to a temporary tranquilizer, the Colonel has him dosed with, Ender realized that he’s been having dream-like conversations with one of the aliens. He realizes that one of the aliens is actually on the planet he’s on. He saw it in his dream, so Ender runs off to follow the dream. He follows the path that he saw in the dream, and actually finds the alien. It seems like the alien is going to kill him, and they have a silent standoff. The alien realizes that Ender is hurt by what he did, and that he didn’t know. Ender somehow ends up taking on the task of protecting the last queen alien of its kind, who happens to be dying. He is now hell-bent on finding a planet for the remaining queen, you know, the one whose entire species he pretty much destroyed.

This is what I don’t get. Dude, if you destroyed these aliens because they could potentially come and take over your planet, once again, why would you try to restore their colony? These guys reproduce at high rates. Planets cannot sustain their lives, so what do you think happens when they establish themselves once more based off of the one queen you are saving? I’ll tell you what happens, you end up with the same exact situation that you just prevented by destroying them all, plus now they will be pissed and know that humans can and will destroy their entire species. Not to mention that they will probably know our tactics next time.

This is what I don’t get, what does Ender expect will happen? He just saved earth, and his family, but now he wants to recreate the threat again? I get that part of Ender’s way is that he is emotional, and that he connects with his enemy. They said that by understanding his enemy is how he defeats them so efficiently. I get that, but come on man, open your damn eyes and stop being such an emotional mess. They will want revenge; they will grow, and they will attack. Eliminate the entire threat once and for all, cry all you want, and get over it. Don’t recreate the threat, because humans will pay for it! Damn fool.

Now that I have seen the film, I have to find out if the other books are done, and if so I’m going to pick them up. I need to know what happens next. I think that Ender is going to end up screwing us up with his ridiculous mission, his promise and “precious cargo.”

This is the same story, just like Rick from The Walking Dead, and all those war films where these guys try to do “the right thing.” What happened to them? Rick lost the prison and many innocent lives because he thought that he could talk sense with the governor when he rolled up to their doorstep with a tank. Here’s what I would have done, a sniper’s bullet right between the tank operator’s eyes, and a bullet into the governor’s head. Threat eliminated, then you can talk and explain to the survivors why it was done. He hesitated, and look at what happened! The same thing with the other scenario, the soldiers were spotted by what they thought were “civilians,” and they get all hung up on the moral issues of killing them. So they decided to let them go. “We have to let them go. They are civilians.” How do you think that ends up going for them? The military guys end up dead when the enemy comes back and kills them.