Game of Thrones brightened up! 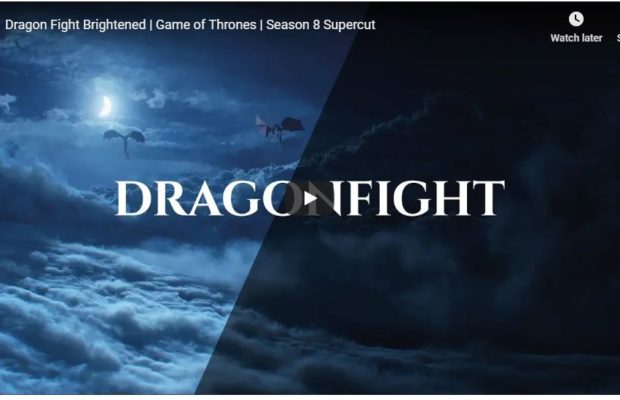 Those of us who watched the last episode of Game of Thrones, you know, the battle we’ve been waiting for over a damn decade were pissed! The cinematographer claims that they were going for a real look, as such they made the scenery very fucking dark! I get that, and I believe you can achieve that end while still letting the viewers actually see what the fuck was happening! Also, in your quest for reality, don’t forget that we are looking at dragons and undead ice monsters! Fuck!

Some people said that it was because our tvs are old and suck. You know what they can do? They can go fuck themselves, that’s some bullshit. The episode was extremely dark to the point we couldn’t see what the heck was happening. There are too many of us saying it to simply put it on our tvs. Fuck off.

In any case, the folks at hivemind have taken it upon themselves to lighten up certain scenes, and its crazy how much we missed because of the darkness of the episode. I say that HBO, or hivemind if they would be so kind, please lighten up the whole episode so that we can see it again and fully appreciate it.

Let this uprising of the fans be a lesson for all cinematographers out there, don’t make it so damn dark where we can’t see what’s happening in the show!

Finally, I’d like to take a moment to say, FUCK Cersi for what she did here!