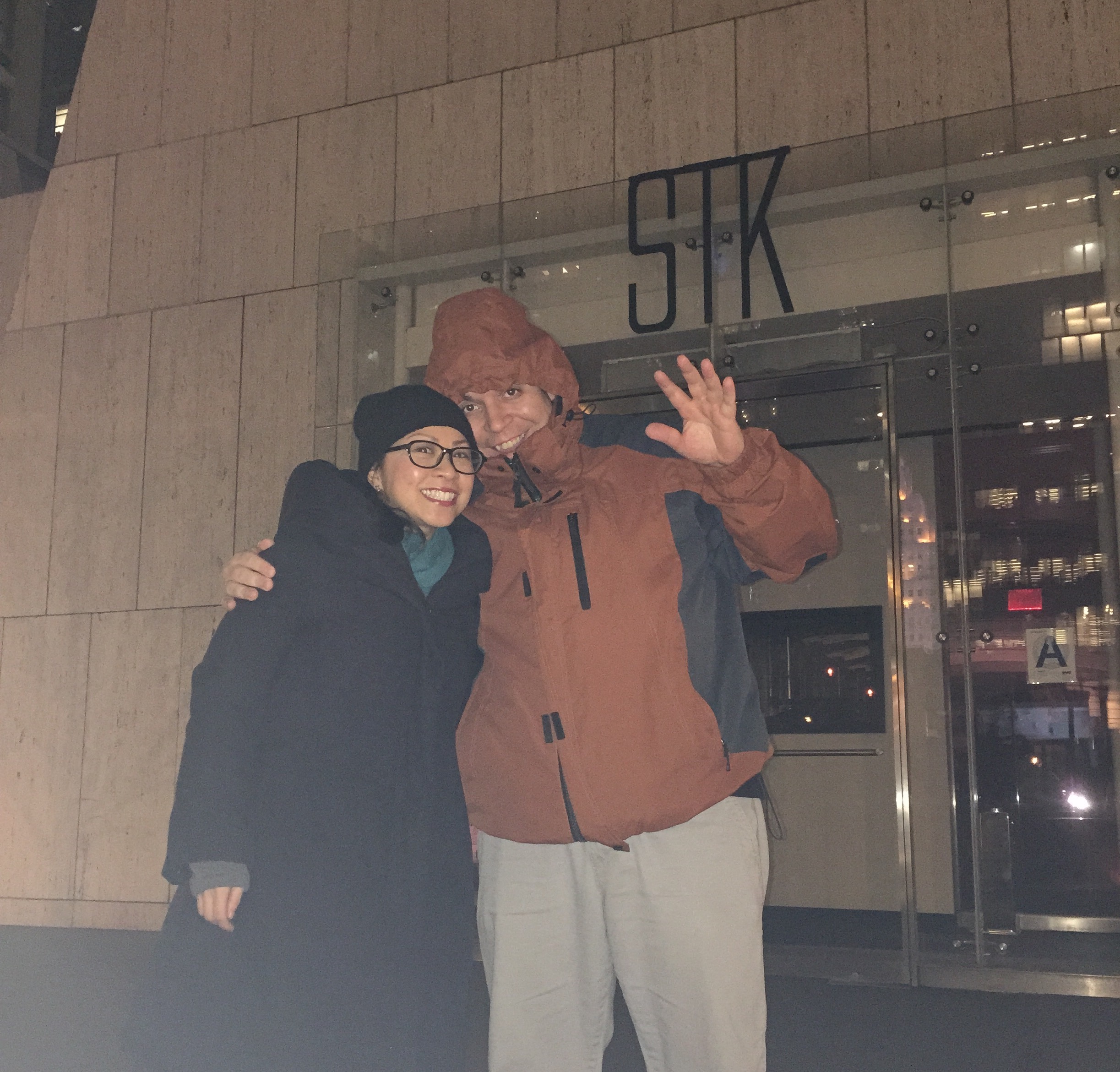 Tonight my wife and I celebrated our four year wedding anniversary. Yes, she survived another year of living in a house with a chronic farter like me! Hahah. All fart jokes aside, I love my beautiful wife, and though life is not “perfect,” I’d say we are living pretty damn good. So kudos to us for surviving another year in this crazy world! One of my friends put it best, “Angel, you married up! I hope you know this.” Yes, my friend I know this!

For our wedding anniversary I wanted to take my wife somewhere nice, but not one of our regular celebratory haunts. I wanted for us to try a new place. I began to search for a restaurant a couple of days ago, and STK came up on the radar. Granted, we went to STK in Florida so it is not all the way new, but it has been years and this is a different state. So I opted for this spot and made our reservations.

The building the restaurant is in covers the span of a block, so initially I went the wrong way. The entrance to the restaurant is by the stairs on the plaza, not the main building location. I had to circle the whole block to make it over, and on a cold day like this, no bueno! So take note of that, if you are at the address, but didn’t go up little steps, and you are not at a plaza, you are probably at the wrong spot!

Upon arriving, you are greeted by the front desk friendly staff. I provided my reservation name, and we were directed to our table. The interior of the restaurant is pretty chic, and uber cool! My wife took this picture of the view from our table with her new iphone. Clearly she takes better pictures than I do! The table was a half circle booth style, with a round seat configuration. Instead of sitting across from one another, we sat next to each other and had to turn to talk and look at each other. At first that felt kind of weird, but it became comfortable rather quickly. Plus I was able to put my arm around my wife as we spoke and waited. Hehehe. 🙂 They had a dj playing some awesome top 40 songs! The kind of music that you’d hear at Webster Hall on the main floor! I wanted to dance yo! Me and the lady were both enjoying the tunes! We started talking about Culture Club, and I think we need to pay that place a visit. I spent many, many a night at the old Culture Club. I had the hook up there too! I’d show up, boom, to the front of the line, free admission, drink tickets, just straight hooked up! I miss those days!

We were checking out the menu, and I saw “Kobe” beef on there. I love kobe beef, so I decided to inquire as it said “Market.” Well, yeah, Kobe went off the options list rather quickly. $30 per OUNCE, with a minimum of 3 ounces! Bro, that’s more expensive than crack! Can I afford it, yes. Would I have bought it for my wife if she wanted it, yes. However, for me? Man, screw that, I don’t want kobe beef bad enough that I’m willing to pay $90 for 3 ounces! Not a chance! My wife agreed, this is a luxury that isn’t worth it! Mind you, dinner cost me damn near $300 without the kobe beef, so imagine the bill had I gone for those measly 3 ounces of meat! Again, not a chance!

As I’m writing this review, and rotating the pictures, etc, I’m getting really hungry! Grumble, grumble goes my tummy! They started us off with some delicious, soft bread and butter. This was pretty damn good ladies and gentleman. My wife had a few bites, but I devoured it all! I’m a beast! We had two appetizers, a lump crab salad, and the tuna tartare. The tuna was so good, as fresh and tasty as I’ve ever had raw fish. So good! The lump crab salad was good, but it didn’t wow me. Don’t get me wrong, it was a good dish, but I guess I expected more. Since we were at a steakhouse, we both decided to have some steak. Though as established, it wasn’t the kobe beef. Haha. My wife went with a relatively small Sirloin steak. She enjoyed the dish, and I liked it too, but I think she had it cooked just a bit too much. I remember how my friends would tease me for getting my steak well down, little did I know what I was missing back in the days! Now I go medium at most, it’s so much better soft and pink! I also went with a steak, but the one I chose was a tad larger, and had the bone. The steak was good, but I have to be completely honest and say that I really expected much more in the flavor department. I’ve become accustomed to a certain taste and flavor when eating “high end” steak. This one fell slightly short of that, and I did get it medium. I don’t know what happened, it maybe they cooked it too long, or the cut is just not up to snuff. It wasn’t bad, just not as good as I expected. I went with the bone in option which was slightly more expensive because I was told by our server that this was the more flavorful option. This was a bit of a disappointment. I had some king crab laid out on top of the steak for good measure, and this too was just lackluster. Bummer. We shared some side dishes with our main courses. Creamed spinach, creamy yukon potatoes, and mac and cheese. All of the sides were good, but the mac and cheese was the mvp. I really liked that dish, and though the mashed potatoes were also really good, they seemed a little too soft to me. The spinach wasn’t fully creamed, but that didn’t bother me. I liked it as well. Finally, you know we both had to get dessert! My wife went with the “birthday cake” and I got the fudge brownie. Both desserts were good, though my wife complained that hers was way too sweet. She didn’t eat the frosting as it was too much. My brownie was pretty good. Overall the service at this restaurant was great, the vibe and ambiance was really good, and the food was okay. I had higher expectations, and though none of the food was “bad,” it simply didn’t floor me as I hoped. Particularly the steak, that was a letdown. The tuna tartare was by far my favorite of all the dishes, I’d love to eat that one again. The others, meh, I don’t think I’ll miss any of them should I not have them again.

Great review! I’ve always wanted to dine at STK. The food looks great, and the desserts look so yummy, too. FYI: your wife is beautiful.

Thank you, like my friends said, I married up. LOL. Everything looks great, but sadly I was deeply disappointed in the food. I had much higher expectations when eating at a specialty place like this. It wasn’t terrible or bad, just didn’t live up to expectation.

Congrats on your anniversary! That meal looked amazing. Great pics!