Those of you who are following my fitness journey know that I’ve come a long way since I started back on my fitness journey. I’ve dropped over 75 pounds and many inches since then. I’m still working towards that flat stomach though! You may also know that I used to, and have wanted to return to Brazilian Jujitsu for some time now. I’ve trained with a few people, but I spent the most time at The Blitz Center with Marcos Santos and Jucao Ailson Brites (before he opened up his own school).

I wanted to train at what I consider a “pure BJJ school.” Many others are striking schools, or karate and have a BJJ program as an after thought with blue or purple belts as their top level instructors. I wanted a real spot, and from all my research, in my immediate vicinity, UNABJJ is the spot. 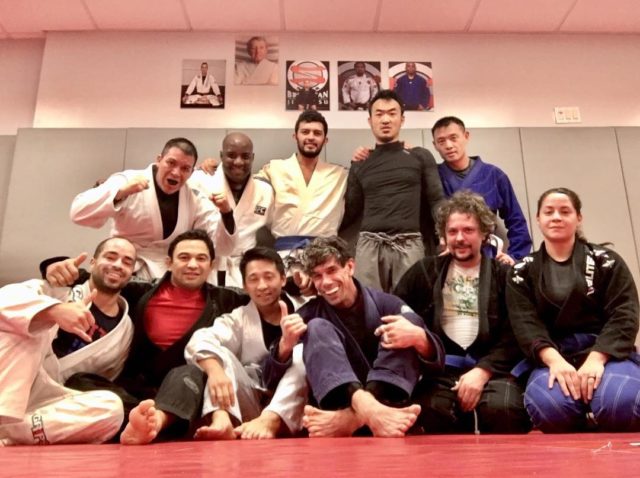 I’ve been talking to Fred Villarica, the owner for over a year now trying to plan my trial. But I’d never actually gone in until last week Friday. I’ll be honest, I was intimidated after being out so long. I was pretty good when I was younger, for a beginner, and I know I won’t be the same after all these years. I was also afraid of getting hurt and derailing my long term fitness goals. However, I decided to take my balls out of my man purse and put them back where they belong and just went for it. I showed up in the pouring rain, I refused to let that make me quit. It was a battle of wits between me and the weather. I accidentally took the wrong bus going in the opposite direction. I had to walk back and ended up getting some nasty blisters from my new rain boots. I quickly used up my one hour buffer and arrived late. But I refused to go back home. It was a matter of principle that whatever was trying to stop me from going would not.

So anyway I made it, and I stood around a bit. I nodded at the purple belt on the floor who appeared to be running things, Kevin. I didn’t know if I was allowed to get on the mats so I began to change and just waited for someone to engage me. Eventually, Fred saw me standing there looking like the idiot I am, and he came over and said “Get on the mats.” So I obeyed and joined in the drills. We did quite a few drills, some of which I had to modify due to my permanent wrist injuries, but for the most part I did everything they did. I can’t do any of those bear walks since my wrists don’t bend. I tried to do them on my knuckles, and I was successful, but it tore up and split my skin. This is not desirable so I won’t do that anymore. I’ll modify to work around my wrist injury.

The school is about the same size as many other schools I’ve visited and trained at. The mats appear clean and sanitary. The bathrooms and other common areas are also clean. The training is solid, but I knew this before I got there, I did research the school prior to arriving. Also, my buddy Allen Lee trained with them for awhile, and he highly recommended them as well.

The folks I’ve met so far are all really cool, as I mentioned before, I was very intimidated coming back, but once on the mats, and around the great group of guys and gals, I was all good. Truth be told, most of the people I’ve met in combat arts are cool. There is a camaraderie we all share as fellow practitioners. There’s only been a time or two where I met an asshole at a martial arts school. Most people are part of the unit that forms the school. I’m not looking to go back into underground fighting again, but I still decided to join Unabjj after my trial was up. I want to work and maybe one day I’ll compete at a grappling specific competition. No more punches, elbows, shins or kicks to the head, those hurt alot! LOL. Anyway, for now I’ll just train and learn as much as I can. The rest will come as it comes. I even gave up my rank to start fresh. I don’t want to walk around with two stripes on my white belt if I’m basically a beginner after 13 years off the mats.

I still have my strength, HIIT, and Zumba classes to teach, so for now I’ll only be going twice a week. I’m only human y’all, and I’m old! This type of training is very different to any other form of training I do outside and it’s really challenging for me at this point. In order to improve, I added some of the drills that I struggled with to the fitness classes I teach, selfishly, to make myself stronger at them!

You know what is a good indicator of a good martial arts school? If the guys are really good. Everyone I’ve rolled with is pretty damn good. Even the younger, smaller guys are very crafty. I don’t go very hard when rolling with the younger ones because this isn’t about tapping or dominating them, it’s about learning and moving. I pretty much become an uke (the person who “receives” a technique) for them. I allow them to work for position, while providing resistance and using some of my weight. I’ll block them here and there, but eventually I allow them to get the dominant positions and execute their submissions. When those kids grow up, they are going to be amazing at what they do.

The adults are also good and I’ve had some good rolls with some beasts. I’ve been getting my ass handed to me, but as my BJJ specific conditioning improves, I look forward to providing more value to my training partners.

I’m a very big fan of Unabjj and definitely recommend that you check us out if you are looking for a real deal Brazilian jiujitsu school.

The magic of eggs!