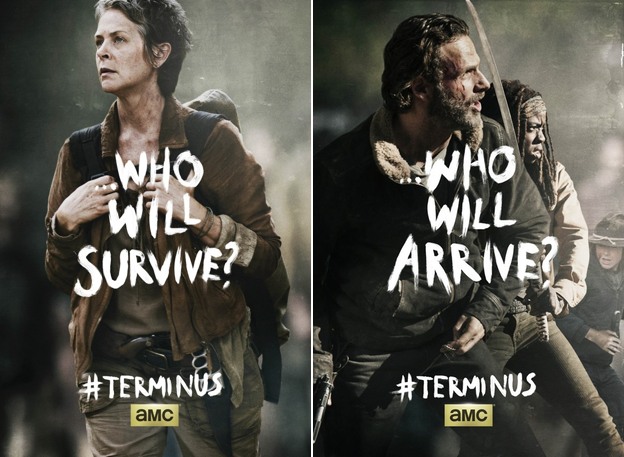 Ladies and gentlemen, the return of The Walking Dead tonight has got to be one of the best episodes that they have ever aired! We saw it and felt it all tonight! Excitement, joy, frustration, confusion, and about every other feeling a human being could experience.

*SPOILERS! STOP NOW, OR DON’T CRY LIKE A LITTLE BIATCH WHEN I RUIN IT FOR YOU!*

Carol stepped up to the plate today, and she performed like an all-star MVP! I mean, she hands down, literally, 100 percent saved the group. I mean these guys were seconds away from getting killed, seconds away. That’s when Carol went all Rambo and bombed the crap out of terminus. Wow, for all her times annoying me in the past, she stepped it up today, and went above and beyond any place that any of us would have ever thought capable. Yo, without Carol tonight, there would be no show. The main characters would have been decimated! Carol, you have earned my respect. You have morphed from a weak, abused victim, into motherfreaking MacGyver! You are the bomb! Tyrese, you really pissed me off tonight. You mean to tell me that this idiot went next to the little girl, you have a gun in your hand, and you put it down so he wouldn’t hurt her? Seriously? It didn’t occurs to you that you could just shoot the guy? He’s been telling you that it’s you or him. Bro, wake the fack up man! I will give you props, you seem to have redeemed yourself after it was all said and done. However, the risk you put yourself, and Judith in, was absolutely unnecessary. The geek himself asked you, “Why haven’t you killed me yet?” It’s time to man up, this is a zombie apocalypse, ain’t no time for none of this conscience bullcrap. During the Talking Dead, they asked if Carol was ready to lead the group. My answer, and most people answer no. See, a good soldier is not necessarily a good leader. There are individuals with talents, and Carol has come into her talents as a warrior, however that does not mean that she is ready to lead. I’m not saying she can’t do it, but Rick is doing a mighty fine job of it. I’d say he should continue in that roll for the time being. He is also back to the tough guy that he needs to be to survive in this world. No mercy!

How about those terminus nut jobs, eh? I’m glad they got what they deserved. I get that they experienced abuse, and were victimized by some very bad people. However, that does not give you a carte blanche to murder everyone who arrives. Eating and slaughtering humans like cattle, or in some cases worse. Nah, you guys are wrong, and I’m glad your home was destroyed and that most of you were killed. You deserved it!

So ladies and gentlemen, I ask you, are you the butcher or the cattle?

I am really surprised Bob is still alive.