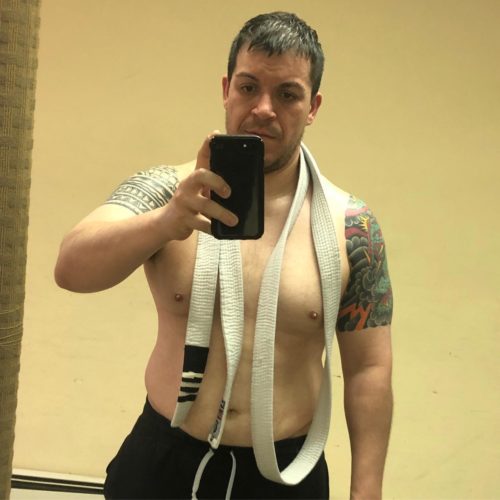 So I recently got my 3rd stripe in the Gracie Combatives program. In fact, now I’m almost to the 4th one, I’m about 3 classes away from that. As you may or may not know, our stripes mean something different than the stripes in a sports BJJ gym. We follow a curriculum and the stripes represent how far along you’ve come in that curriculum. You show up, you get an X, you get enough Xs and you get a stripe.

In most schools, the professor promotes you when they feel like it, based on their own observations and opinion of your game and progress. This also applies for blue belt and so on. There is no established curriculum, it is solely at your professor’s discretion.

In the Combatives program, until the test for your combatives belt, there is no professor opinion or decision. If you show up, you get Xs on your card, you meet the number of required Xs and you earn your stripes. It is based on how often you’ve shown up, which should have bearing on your skills. However, at the end of the day, they are earned by showing up. Though one could argue, that the only way to learn is showing up, so there’s that logic.

The Gracies are really good about structuring it like this, and I have been teased by my old sports BJJ pals for having a report card now.

I have attained 2 stripes on my white belt, 3 times now. The first two were at sports BJJ schools, and the last one was at a Gracie CTC.

The first one came from Professor Marcos Santos when he ran the Blitz Center over here in Midtown back in 2006. Oddly enough, he promoted me to the same belt that the Gracies use as the combatives belt. That represented two stripes in his school. Green represented 4. He eventually moved to Texas and Marcelo Garcia took over most of his students.

Professor Jucao took that belt from me and threw it in the trash when I showed up to his school with it on. He then threw a white belt at me and told me, “That is a women’s belt in Brazil, I will promote you to blue when you show me you earned it.”

The second time I earned my two stripes was from Professor Fred Villarica. One day after class, he called me and a few of my a.m. warriors over and gave us two stripes. After that, I proceeded to get my butt whopped by one of our enforcers. I guess he was just chin checking me to make sure I stayed humble.

This final time, it has been here at the CTC.

I’m really proud and pretty excited to complete the combatives program. It has been a long journey with many months off due to my ongoing injuries, but I haven’t given up. I almost did quite a few times, but I kept showing up. Showing up, that’s what I’m most proud of. They say third times a charm don’t they?