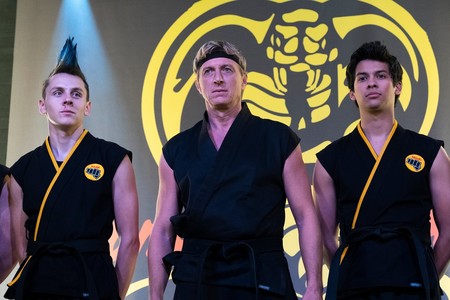 I plan on doing a deep dive on Cobra Kai in the Not Just NYCTalking Podcast in the coming days. However, for the time being, I wanted to just touch on what I believe is the biggest issue on this show.

I don’t think this article will contain spoilers, but I will be talking about concepts that may be perceived as spoilers. So do proceed at your own risk.

First of all, I have to congratulate these folks on doing a phenomenal job with the show. My family has really enjoyed it and we are all glad it made its way to netflix and will be renewed yet again. Woot woot!

As I watched the show, I noticed one glaring issue that led to pretty much all of the drama on the show. The biggest problem here is a lack of communication. If these people would simply stop reacting impulsively, on emotion and just take a moment to talk and clear the air, much of the conflict could have been avoided.

I understand that with the kids that might be a bit more difficult. I was a kid too and I know how at that age they tend to react on impulse. However, Johnny Lawrence and Daniel LaRusso are some grown ass men and they have no excuse for getting sucked into this childlike behavior.

You would think that at a minimum, Daniel would have the emotional intelligence to talk and not react so negatively to everything. Seeing as though Johnny Lawrence is a bit of a neanderthal, one can understand him going over the deep end. You’d expect more from Daniel, but that’s not the case, he too gets swept into reacting on impulse quite often throughout the series. So much so that he almost loses all he’s worked so hard for.

I said that there were no actual spoilers here, and I’ll keep it that way. I’ll close with this. If instead of knee jerk reactions, these two guys would just talk during several scenarios that we see in the series, they could be the best of friends and avoid so much harm.

Stay tuned for the podcast where myself and a few friends will deep dive into this show!

High school was a long time ago, it’s about time to grow up boys!