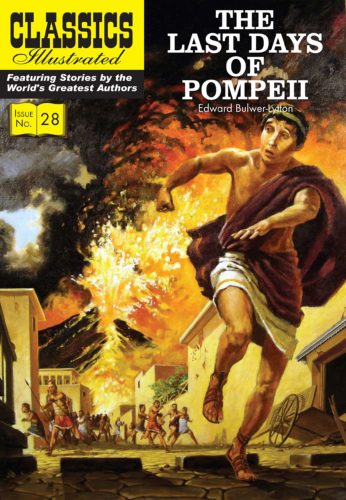 The last days of Pompeii has been made into films, series, documentaries, exhibits and much more. For years I’ve been meaning to read the classic story behind that but never got around to it. Some months ago a friend of mine mentioned “Classics Illustrated” to me. So I decided to check them out.

I got a copy of one of the illustrated comics and then compared the story to one of the actual classic novels side by side. I found that the conversations and content was pretty much the same. Instead of all the descriptions, you just get the main story and dialogue as the images do all the describing you need.

Anyway, The last days of Pompeii was the first one I read in its entirety. I gotta tell you guys, I found this story to be pretty damn jacked up. First and foremost, the story was nothing like I expected. The actual volcano eruption has very little to do with the story. Instead it focused on following around a man named Glaucus, his love interests and a few other key individuals.

The whole story is terribly troublesome. I mean, dudes are getting away with some grimy, horrible stuff. But that shouldn’t come as much of a surprise, we are talking about Ancient Rome after all. Slaves were a common thing, money and power was all that mattered to people back then. The rest of human life was insignificant. Without putting forth any spoilers, this story had me reeling as I read. I couldn’t believe what I was reading and how certain people were treated. This was a tough time to be alive and don’t you be expecting a real happy ending here. Well, for some it is, but for some who matter it really isn’t.

Damn, Edward Bulwer-Lytton, you sure were a brutal writer!