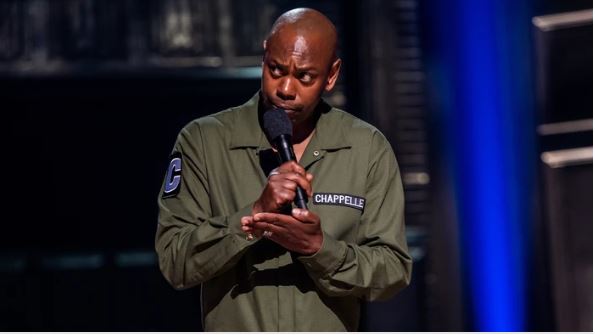 So I recently watched Dave Chappelle’s New Netflix Special ‘Sticks & Stones. I’m a fan of the guy, so let’s get that out there. I find him to be one of the funniest comedians out there. Let’s be clear on that right from the gate. I love his stand up and I loved The Chapelle Show.

All that being said, in this new special, Chapelle came out swinging like a man who didn’t have anything to lose. Unlike many comedians of current times, my man didn’t hold back on anything. I mean, as I watched this I was thinking “Man, this dude is doubling down and telling everyone: I DON’T GIVE A FUCK WHAT YOU SAY OR DO.” I suppose that given his hiatus, his personal experiences with the powers that be, and the fact that he’s probably already very wealthy, that he’s not too worried about losing sponsors, opportunities and so on.

The jokes were definitely harsh and he really pushed the envelope. A lot of folks are going to have a problem with this special and how offensive it is to so many different groups of people.  He even said that his wife told him not to do the Asian jokes, she’s Asian. But clearly Dave doesn’t give a shit, he did the Asian jokes and then some. He’s staying true to his controversial comedian roots and just speaking about whatever he wants.

Honestly, I’m even surprised that Netflix allowed this special on the air. He just really let loose here. I will say though, among all the abuse he hurled at so many different people from so many backgrounds, he also laid down some hard hitting truths about the world as it is today.