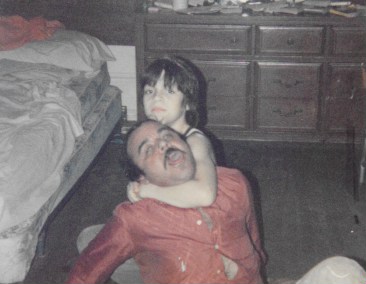 Often in Brazilian Jiujitsu when I spar with someone new they ask me if I have a wrestling background. This is because I have good pressure, control and a solid base while on the top positions. Of course this is only the case with people on my level. It isn’t the case when I roll with the higher belts who are better equipped to deal with my talents, or lack thereof. But if I play top game with someone my level, they have their work cut out for them.

Lately, I’ve been starting from my back and putting myself in compromising positions. From there I try to transition into top position, but only after earning it by fighting my way there. I’m doing this because I’m trying to improve on my areas of weakness. I do end up on my back when I fight folks who are better than I am, and I’d like to be able to get out of there. As such, I’m working that weakness, even though I often get tapped, dominated or stalemated.

To answer the original question though, no, I’ve never wrestled. Unless you count my pretending to be a WWF superstar while playing with my friends or dad as a kid. Also, I’ve rolled with guys who are wrestlers and those guys usually tool me. I wish I had the grit, skills and overall toughness that wrestlers have. Those are some of the toughest athletes out there. I wish I had their skill set.