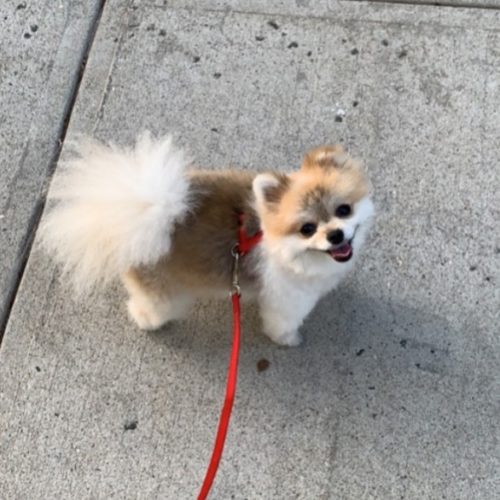 If you’ve ever met my puppy, odds are very high that you lost your mind when you saw how cute and tiny she is. Peppa is like a local celebrity in our neighborhood. People I’ve never met know her name and surprise me as they say, “Hi Peppa!” This is the general experience. Although there are some individuals out there who don’t have a soul and pay no mind to the queen. That’s the exception though, for the most part, people love her. So yeah, not for nothing, my dog is super cute and you bet your ass we all know it.

In any case, because she is so tiny and cute, against your better judgment, you might be tempted to simply pick her up as if she were a teddy bear. Believe me, I understand that inclination. But you must remember that Peppa is not a thing, she’s a sentient being. She has feelings, emotions, likes and dislikes. And guess what one of her dislikes is? If you said being picked up by some random person that she doesn’t know in the street you win, you win! Some people ask me if it’s okay to pet her, take a picture or pick her up. I tell them to engage her and see if she comes to them when it comes to petting her. I’m pretty cool about pictures, as long as you don’t bother her. Regarding the matter of picking her up though, I generally tell people that she doesn’t like to be picked up by people she doesn’t know. She gets scared and thinks someone is going to take her away from us. As such I tell them that they cannot pick her up.

So today was one of those days where I had to check someone about this. As I walked her, a young man, probably in his 20s just decided to pick her up. Peppa looked at me scared and confused. I nicely but very firmly told the guy, please put her down. He was either ignoring me or didn’t hear or register what I was saying. So I repeated it a second time, slightly less nicely, louder and I came in closer. The guy still didn’t put her down. I think the guy who was his dad realized that he wasn’t understanding me and he said something in his language. At that point the young man said “down,” and I repeated for the third and final time, “Yes man, set my dog down, she doesn’t like being picked up. Do it right now!”

As I mentioned, he wasn’t a child, but I gave him the benefit of the doubt because he didn’t seem to speak English fluently. Clearly he’s not from around here. When he put her down, she came to me, then went back and ate something that was stuck on his finger. I have no idea what the hell it was and it was fucking gross. I didn’t like that but she eats everything this dog. It’s really annoying because someday she might eat something dangerous. Ugh!

So I’m writing this article, for guys like him or any of you who may think it’s okay to scoop someone’s dog up off of the floor. Don’t do that shit, the dogs are not toys, they might not like it, and by extension their fur parents won’t like it either. I didn’t want to be rude to this guy, but he was pissing me off. You people should be able to tell when a dog doesn’t want to be held. The energy, expression, everything is fucking obvious. Stop that shit! If you really, really want to hold her, ask first and wait for an answer. For instance, I once let an Indian girl with her family hold her during some wedding pictures. I told her to make it quick because she doesn’t like it, but I didn’t want to hurt her feelings during her wedding day. I’m not a monster after all! Also, Peppa seemed to be okay in that instance, but the girl did the right thing by asking. Today she was not happy, so I had to take action to get him to set her down. This all went down very fast by the way, a few moments at most.

Anyway, don’t be that person, it’s not cool at all and to be honest, it could get you punched in the face.