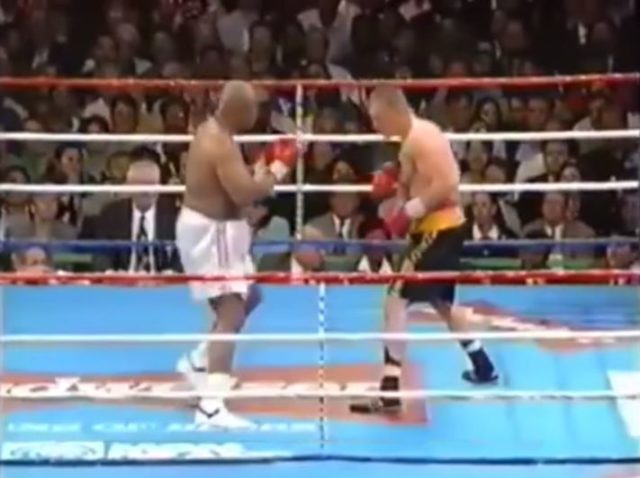 I’m a huge George Foreman fan. I think that these days he is one of the most likable and entertaining individuals the world has to offer us. I loved it when he came back and won the championship. Watching this older man who was from the era of Muhammad Ali step into the ring with the generation of Evander Holyfield was definitely a treat! Let’s establish that early on for clarity, I’m not here hating on the champ!

All that being said, I have to say that I remember watching this fight in its entirety back in 95. Though I was rooting for Foreman, I don’t think that anyone can deny that Axel Schulz won this fight. I think its clear that the judges favored Big George Foreman and at least two of them were not watching the same fight as everyone else. One could argue that all 3 of them were watching some other fight.

Mind you, I was rooting for George Foreman, I really do love the guy. But these judges did Axel Schulz wrong. This dude went 12 rounds, he fought a hard fight, and if you ask me, and most people who were at that fight, everyone would agree that Schulz won that fight. It’s tough though, I get it. Foreman is our hero and they weren’t about to let the title leave his hands unless it was a decisive victory.

In the post fight interview Foreman seemed convinced that he won on points, I’m not sure about that. However, he did make a good point, if you are trying to beat the champ, you can’t run. Maybe Schulz didn’t engage him enough in the early rounds to convince the judges?

Anyway, this is long ago history. I just thought about it this morning and thought I’d start the conversation. Who do you think should have won this fight back in 1995?