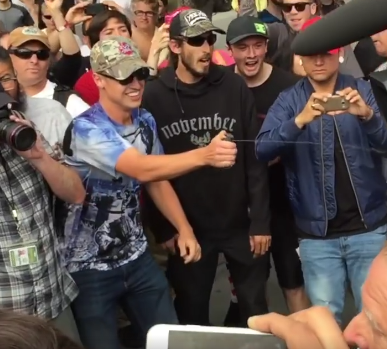 A couple of days ago I came on this very website to condemn a verbal and somewhat physical assault against a Trump supporter, by Latino anti-Trump protesters. They threw eggs at her, scream at her, spit at her, and continually flashed a Mexican flag in her face. This was not cool, and I condemned it.

I have stated time and time again, that I don’t care what side you represent or support, wrong is wrong. Here we have another case of the same. You see the Latinos on one side, and the camo clad, Trump supporters on the other side. Next you see one of them, seemingly unprovoked begin to discharge a bottle of pepper spray. He is smiling as he inflicts the burning sting of the pepper spray on these guys, and continues to follow through with a steady stream of the burning liquid.

Now I ask you good people of the internet, is this okay? Aren’t these weapons of self defense meant only to be used when one is in danger, and not for sport, or laughter like this jerk did? I wonder if he was apprehended for this. As far as I’m concerned, this was an unprovoked assault and the guy should be punished for it.

Notice how others are filming it, quite possibly for some hate site where they will brag about hurting the invaders. Though, that is speculation on my end.

What are your thoughts on this?