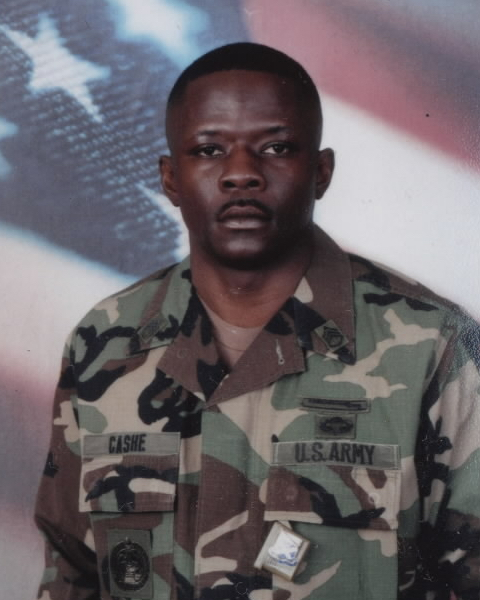 Meet Medal of Honor recipient, Sergeant First Class Alwyn Crendall Cashe. This man not only walked through the flames, he did so while he himself was in flames, and he did this 6 different times!

While on tour in Iraq, the armored vehicle he and his men were riding in hit an IED. The explosion left SFC Cashe covered in fuel, but barely injured. As such, he did the work of a true hero and pulled out his driver to extinguish the flames. He then proceeded to go back into the vehicle to extract the remainder of his men one at a time.

As his uniform was covered in fuel, he too caught fire. However, he ignored this, as well as enemies firing on them and continued to remove all his men from the burning vehicle. After this, he refused medical evacuation until his men went first. SFC Cashe would succumb to his injuries weeks later.

This man risked his life, despite being barely hurt, to save his men. Had he carried on, he may have been alive and healthy today. However, this hero did not care about himself, he focused on taking care of his men before himself. That is the truest of heroic behavior. I don’t know how many of us could actually do something like this.

SFC Cashe was initially awarded a silver star, but was posthumously granted the Medal of Honor for his truly selfless and heroic behavior. His widow received his Medal from President Joe Biden December 16th, 2021.

I hope this man’s spirit is resting his peace knowing that he did what so few could or would. I hope that our government has taken care of his family and I hope that they are proud of his brave acts. I know that losing him is a terrible thing, and I know they wish he were here with them today. But I know, that despite his loss, they must be so very proud of the kind of man that he was. Rest in peace hero.

This week marks the beginning of fleet week festivities. Next week the city will be flooded with Naval servicemen and Read more

Stop the deportation of U.S Veterans.

Here at NYCTalking we try to run a site based on facts and fairness. We do not base our opinions Read more