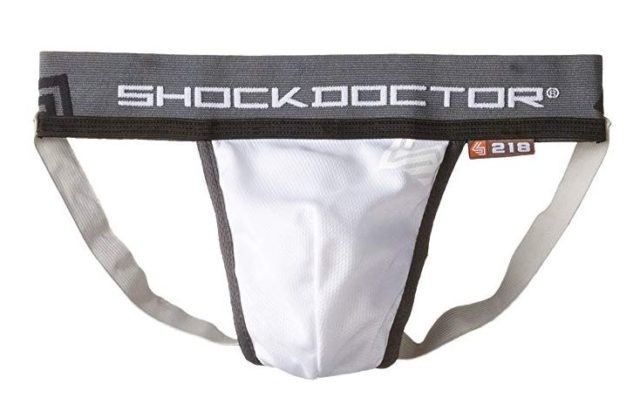 I mentioned in a prior post about my surprise with people not wearing mouth guards while training. Well, imagine my even greater surprise in discovering that even less of them wear a damn cup! Say what son? It’s one thing to want to lose your teeth, but to sacrifice the boys, that’s a whole other story.

I have never, ever, ever, not once stepped on any mat or combat situation without wearing a cup. Granted, the cup doesn’t entirely eliminate the fact that a shot to the jewels will drop you, but it can greatly reduce the level of impact and possibly keep them from being reduced to powder.

I’ve always been a fan of the basic jockstrap, just like this one by shock doctor. I tried the ones that come with compression shorts and I had mixed experiences with those depending on the specific brand. The shock doctor one was not very good, but the one from Battle Sports was a bit better. However, nothing works as great as these types in my opinion.

Because of the shape, it can go in a bit deeper between your thighs and as such do a much better job of “cupping” and protecting your “oh so sensitive” balls. I’ve used this one once so far, and it did a pretty good job of protecting me. It stayed in place and while training I damn near forgot it was even there.

Initially, the straps were kind of cutting into my legs and ass cheeks, but that stopped relatively quickly. I can’t speak as to the durability of this product as I only just got it, but so far it is okay. The cup I’m using is the one that came with the compression shorts I bought from shock doctor. It fits pretty good and no issues. Durability aside, I’d say this product is as good as any groin supporter I’ve used. It is also quite affordable, for the time being, I’m a fan.