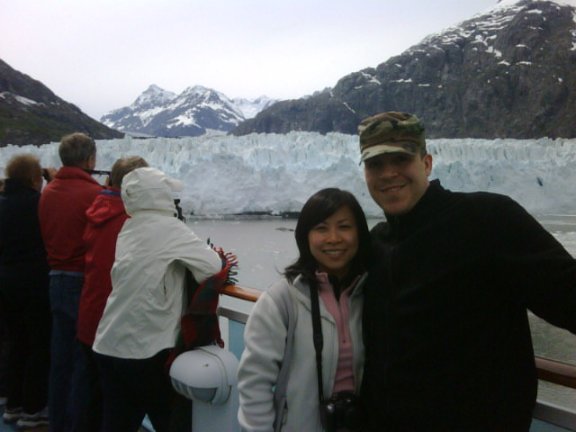 Some years ago myself along my wife and her family went on a group vacation. We took a cruise in Alaska. Mind you, I had no idea what to expect in Alaska, but as far as vacations go, this was one of the more tame ones I’ve ever taken. There was no La Boom or Señor Frog’s bar hopping tour. There was no liquor, nudity or insane antics. There were however some pretty amazing experiences that I will be sharing with you.

So the sad thing is that this was a fairly long time ago. Considering that I don’t remember all that much from 1 week ago, clearly a decade ago will be impossible. However some things are seared into memory, and this is one of them. You can see the glacier there, it appears small in the picture, but consider that it covers the base of a very big mountain and we were fairly far away from it.

As the ship passed by the glaciers we kept hearing powerful and thundering sounds. At first I didn’t know what it was, but I soon realized that these were chunks of ice and snow falling off the glacier and into the water. The thundering sound was the ice hitting the water. This fascinated me, the sheer volume and power of it made me really appreciate how large and majestic this was.

Now this is neither here nor there regarding the vacation itself, but look at how beautiful my wife is. She looks like a movie star.

This here is my pretty lady on top of the ship. You can see her hair blowing. One thing that wasn’t amazing during the trip was the weather. We had some excursions cancelled due to cold and rain. I mean, I’m grateful for the concern of our safety, but the weather ruined a lot of things and mostly sucked.

Anyone who’s ever taken a cruise knows that you spend a lot of time on the ship. Especially during crap weather. In that time you eat, watch shows and every so often you become a part of the show. I don’t remember what this game show was about, but I think I look smart.

This was another night and I’m pretty sure I was singing “Daddy’s Home” by Shep and the Limelights. I think this was actually the first time I ever sang on stage without drinking alcohol. Interestingly enough, on this stage is where I first learned about the song “You to me are everything” as the cruise band sang it a couple of times. Great song.

Here is another game that my bro and sister in law were playing. Just as with mine, I don’t remember a damn thing about it. But she’s laughing so that can’t be a bad thing. LOL.

Yup, you guessed it, no clue what my father in law was saying, but again, I looked smart. LOL.

One of the coolest things we did and saw where the sled dogs. This was a puppy, but he was so heavy and his paws were huge. Beautiful creature.

Behind me you see where all the dogs are housed. There were so many dogs there and they were all housed in the same fashion. I felt kind of bad seeing it, but I remember someone telling me that the dogs loved their jobs and this was part of it.

This here is where the dogs are in their element. I had no idea that people exercised sled dogs when there wasn’t any snow. But they put us on this wheeled cart and the dogs gave us a ride. Please note, these guys can poop while mushing. It is a talent.

We went boating out there, it is very beautiful scenery.

Last but not least, this is the ship we were on for the duration of the cruise. I wasn’t a big cruise guy, but before I pass judgement I’d like to try it once again. I am much older now and my perception may have changed.

All in all, Alaska is a beautiful and scenic place to visit. We had just missed the bear and trout season, actually pretty much all the wildlife. But despite that, it was a nice and relaxing trip. I’d love to do it again in my current stage of life.

[rating:5] I had a nice week and a half off from work. I spent the first half with my son Read more

First impressions are everything! Every once in a great while you have an experience that really needs to be shared. Read more

At present, Turkey is going through a very difficult time. Tragedy has struck the nation in the form of a Read more

Bahamas One of my favorite vacation destinations

Years ago, I went to the Bahamas. I've traveled quite a good deal, from America, to Asia, and as far Read more