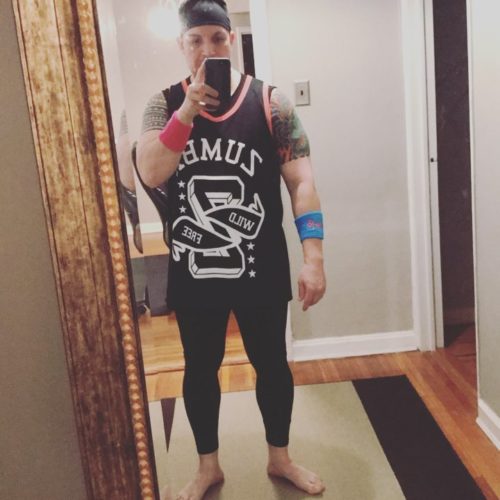 I’ve often wore leggings, but I wear them underneath my pants or shorts. Basically to protect my skin from becoming irritated due to the friction of working out. Yesterday, I decided to wear my Zumba leggings by themselves. I went back and forth with the idea for several minutes. I put on shorts, took them off, put them on, took them off, and repeated that several times. At one point I just said, screw this, I want to wear them, and I’m going to wear them!

I did make sure to wear a slightly longer shirt as I don’t want my goodies to be all out in the open like that. This morning, I put on a pair, and as I went to grab the shorts, I said, “No! You will wear these as you want to! What are you ashamed of, Angel?”

So again, I wore leggings to work out. There is something that I discovered though. Something that I didn’t know but apparently all women already know, leggings alone are super duper comfortable! I think that is probably a women’s best kept secret. They already know this, but we don’t. And why is it that men don’t know this? You might not like it, you might deny it, but I’m gonna lay it out for you right now.

Men think that leggings are feminine. Wearing them makes men think that people are going to think they are gay. Now mind you, I do and wear many things that make people think I’m gay, and I don’t care. But for some reason, I could never get comfortable with the leggings. Now what about them is gay? Well, nothing really, it’s just that mostly women wear them and not men. So there is some unwritten rule that says they are for women. There is also some other unwritten rule that says if men wear them, you gotta wear shorts.

Mind you, I’m not saying there is anything wrong with being gay, but understand that most men, though they may not have an issue with gay people, they don’t want to be perceived as gay if they are not. In my case, it wasn’t about appearing gay, I was scared of wearing them because I have deep rooted body image issues and I knew that everyone was gonna be staring at me. But I challenged myself and I rode it out though! I taught my Zumba class, I girated my hips and I added some extra flair to my dances. I don’t care if I appear gay to the “macho tough guys,” I’m comfortable with my sexuality, but I assure that this is the reason most men won’t wear them.

After finally getting up the courage to do it, I have decided that I’ll be wearing leggings more regularly. I felt so free and comfortable in them! There is only one slight inconvenience I noticed, it’s that they tend to come down on the waist a bit. I asked the lady (an experienced leggings user) about it and she said this is common and the reason why women get those high waist leggings. She said they tend to stay up better. The fashion advice has been duly noted!

Please note, I know that there is no one way that gay people act. I am not saying that at all. But from the male perspective, this has been the response I receive. Even the women who saw them asked me the same thing, “Aren’t you afraid people will think you are gay?” Stereotypes exists, I’m forging past them. By the way, I’m calling them Meggings! LOL.