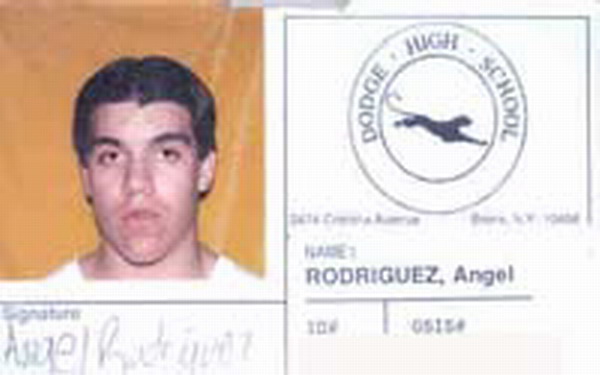 A tale of two IDs…

On the first one above I think that I was a freshman in high school. Junior High School had already started to zap my faith in humanity. The abuse and cruelty that I encountered during that time was only a warm up for what was to come. Upon beginning High School, the last bit of innocence and hope for humanity that I had was being slowly drained from my soul by my abusive peers right from day one.

It’s funny how no one really knew the suffering behind those eyes, I hid it behind a smile and humor. Even as I was being tormented, I tried to make light of it and laugh it off. I hated how I felt going to school. I hated going to lunch, the bathroom, and all of my classes. It was a very hard time for me. I don’t want to get to in depth about it here, but if you’d like to read more about what I dealt with, then read this piece on why I dropped out. This second id picture was taken after I dropped out of high school. As I mentioned above, that time period was a nightmare and I left school due to the torment I endured on a daily basis. This picture was taken when I had just started the girls club vocational training program. Here I met a few people, but the most important one was Mrs Cerette Thompson, she guided me when I needed it most. You can read more about that here!

Soon after this I started attending Monroe college and my life slowly began to change for the better. Once I entered college, the abuse and torment of school was a thing of the past. I wasn’t a super cool person here, but I was bigger, more mature, more educated, and I excelled. People wanted to be close to me to learn and get help. The same thing happened at the girls club. People were now at an age where they realized making fun of someone who was intelligent was detrimental to their own survival. They needed people like me to help them, so they adapted. Anyway, so did I, and I made a decent amount of cash tutoring people with their school work. In some cases, they’d just outright pay me for the steps I took to resolve a problem.

How times change, eh? A tale of two ids!